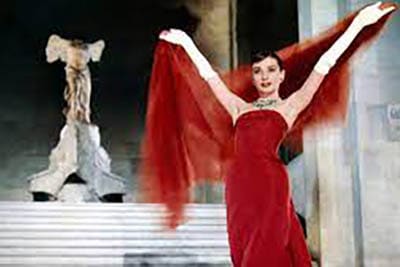 Lots of films have been made about the fashion industry. The two art forms, both based in photography, make natural partners. Blacksburg Museum & Cultural Foundation, in conjunction with the current exhibit Fashion History Moving Forward: Animating the Present, Considering the Past, presents Films About Fashion, a series of three movies running from Thursday, January 19th – Thursday February 2nd.

The series begins with the 1957 classic, Funny Face, starring Audrey Hepburn and Fred Astaire in a musical romantic comedy, directed by Stanley Donen, and containing songs by George and Ira Gershwin. All the famous Paris landmarks serve as backdrops for Hepburn posing in Givenchy. Funny Face is the ultimate in Hollywood glamour that also slyly critiques the fashion world.

Next is Paul Thomas Anderson’s Phantom Thread (2017) with Daniel Day-Lewis in his final film performance. Day-Lewis portrays a gifted, but obsessive and controlling dressmaker in 1950s London, who often stiches hidden messages into the linings of the haute couture dresses he makes. A cheeky model joins his design house and sparks a complicated love story. Phantom Thread is gothic and gorgeous, features an unconventional romance, with breathtaking fashion creations. The series ends with the cult-classic comedy, Zoolander (2001), the “seminal fashion comedy of our time.”

Ben Stiller wrote and starred in the film, which is known for lines like, “Have you ever wondered if there was more to life, other than being really, really, ridiculously good looking?”, and “If there is anything that this horrible tragedy can teach us, it’s that a male model’s life is a precious, precious commodity.”