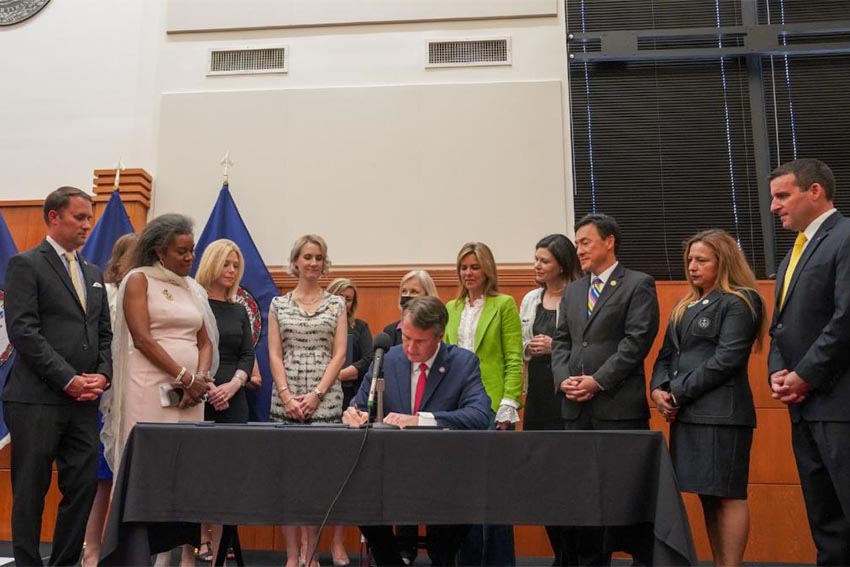 Governor Glenn Youngkin ceremonially signed seven bills that deliver on the Governor’s commitment to enact legislation to combat human trafficking in the Commonwealth and empower survivors. Following the ceremonial bill signing, Secretary Kay Coles James officiated the swearing-in ceremony for the Commission on Human Trafficking Prevention and Survivor Support.
“Today’s first Human Trafficking Commission meeting and the signing of these bills are important milestones in the Commonwealth’s mission to combat human trafficking in Virginia. We gathered together today as a demonstration of the continued collaboration and commitment from this Administration, the Lieutenant Governor, the Attorney General, the General Assembly, localities and Virginians to eradicate human trafficking in Virginia,” said Governor Glenn Youngkin. “We know that what we will do here will have a ripple effect on trafficking across the nation.”
“Thanks to Governor Youngkin and the Administration, the Attorney General, and the General Assembly, Virginia will be better enabled to identify and rescue human trafficking victims and provide them opportunities for a fresh start. It’s going to take all of us working together to continue this effort,” said Lieutenant Governor Winsome Earle-Sears.
“Human trafficking is one of the most heinous, widespread crimes of the 21st century. In addition to rehabilitation and survivor aid support, one of our top priorities is prevention. The war against human trafficking is a complicated, uphill battle, and I am confident these new measures will make a significant impact in the fight against human trafficking. My office looks forward to working with the members of Governor Youngkin’s Human Trafficking Commission to further identify solutions to this horrible crime,” said Attorney General Jason Miyares.
“One of the first goals Glenn committed to when he announced his campaign was the eradication of human trafficking — a cause we have championed for years,” said First Lady Suzanne Youngkin.  “Human trafficking is devastatingly prevalent in our Commonwealth, our nation and our world today. We are deeply grateful for the determination of every Virginian in this room to work tirelessly and collectively to combat human trafficking in our communities. Today marks the beginning of something very special, and we pray for this life-changing initiative.”
Governor Youngkin Ceremonially Signed Seven Bills Today Including:
HB 258, patroned by Delegate Shelly Simonds, D-Newport News, directs the Department of Criminal Justice Services, under the direction of the Criminal Justice Services Board, to develop an online course to train hotel proprietors and their employees, as defined in the bill, to recognize and report instances of suspected human trafficking. The bill provides that such online courses shall be provided at no cost to the hotel proprietors and their employees. The bill requires that every hotel proprietor require its qualified employees to complete such human trafficking training course developed by the Department or an alternative online or in-person training course approved by the Department within six months of being employed by a hotel and thereafter at least once every two years, for as long as the employee is employed by the hotel. The bill has a delayed effective date of January 1, 2023.
HB 283, patroned by Delegate Emily Brewer, R-Isle of Wight, and SB 467, patroned by Senator Jill Vogel, R-Fauquier, requires the Department of Criminal Justice Services to establish training standards for law-enforcement personnel regarding the recognition, prevention, and reporting of human trafficking.
HB 526, patroned by Delegate Amanda Batten, R-James City County, provides that a non-Virginia student, who is currently present in the Commonwealth as a result of being a victim of human trafficking, as defined in the bill, is eligible for in-state tuition. The bill provides that a person may be a victim of human trafficking regardless of whether any person has been charged with or convicted of any offense and that eligibility for in-state tuition may be proved by a certification of such status as a victim of human trafficking by a federal, state, or local agency or not-for-profit agency, one of whose primary missions is to provide services to victims of human trafficking. The bill also requires public institutions of higher education to automatically record such a student as opting out of making any directory or educational information available to the public unless the student voluntarily and affirmatively chooses to opt in to allowing such directory or educational information to be made available.
HB 711, patroned by Delegate Mark Keam, D-Fairfax County, provides that a petitioner for a writ of vacatur for victims of sex trafficking shall not be required to pay any fees or costs for filing such petition if the petitioner is found to be unable to pay them.
HB 1023, patroned by Delegate Elizabeth Guzman, D-Woodbridge, permits any family life education curriculum offered by a local school division in high school to incorporate age-appropriate elements of effective and evidence-based programs on the prevention, recognition, and awareness of human trafficking of children.
HB 1334, patroned by Delegate Kathleen Murphy, D-Fairfax County, amends the definition of “abused or neglected child” to include a child who is sexually exploited or abused by an intimate partner of the child’s parent or caretaker and allows a complaint of child abuse or neglect to be deemed valid by a local department of social services (local department) in such instances. The bill allows a complaint of child abuse or neglect that alleges child trafficking to be deemed valid regardless of who the alleged abuser is or whether the alleged abuser has been identified. The bill requires a local department that receives a complaint or report of child abuse or neglect over which it does not have jurisdiction to forward such complaint or report to the appropriate local department, if the local department that does have jurisdiction is located in the Commonwealth.