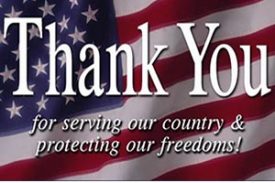 On Veterans Day, we honor the men and women who served our country in the United States Armed Forces.

We set aside this day, the eleventh day of the eleventh month each year, to pay tribute to those who risked, and sometimes gave, all. Because we recognize the importance of their task, honoring them is one of the most important things we do as a people.

One of the most prominent symbols of the courage of our fighting men and women is the Tomb of the Unknown Soldier at Arlington National Cemetery. The Tomb is connected to the date of November 11 not only because of Veterans Day, but because it was dedicated on that day one hundred years ago.

World War I, which was halted at 11:00 am on November 11, 1918, inflicted human suffering and death on a scale not previously seen in the Western world. The scale of the devastation compelled the war’s participants to find ways to honor the sacrifice of so many.

Britain and France had borne a great deal in the war, and they chose to recognize the sacrifice of a generation of young men by each burying one of their unidentified war dead in places of honor on November 11, 1920.

Although the United States had not paid as steep a toll as the European powers, Americans wanted to recognize the sacrifices they had made, too. Congressman Hamilton Fish III (R-NY), a veteran of the war, introduced a resolution in December 1920 to bury the remains of an unknown American soldier at Arlington National Cemetery. His legislation passed.

The next step was to select the Unknown Soldier. In October 1921, four different bodies of unidentified American warriors were exhumed from different military cemeteries in France and brought to an improvised chapel in the city hall of Châlons-sur-Marne.

The task of selecting which would go to Arlington fell to Sgt. Edward F. Younger, a wounded veteran of the war. He was handed a bouquet of white and pink roses and entered the chapel alone where the four bodies lay in identical caskets. After walking three times around them, he chose which would be interred in Arlington by placing the roses on one of them.

That body returned to the United States on the cruiser USS Olympia. After the vessel arrived at the Washington Navy Yard on November 9, 1921, the Unknown Soldier was taken to the Capitol. There he lay in state, and 90,000 people came to pay their respects.

On November 11, the Unknown Soldier was moved from the Capitol to Arlington by a horse-drawn caisson. The procession was joined by President Warren Harding, Vice President Calvin Coolidge, Members of Congress, Supreme Court Justices, and winners of the Medal of Honor. They conducted the Unknown Soldier to his final resting place at the Tomb, at the time a simple marble slab.

President Harding led the ceremony at the Tomb and placed a Medal of Honor upon the casket. Representatives of the Allied Powers followed by bestowing military decorations from their own countries.

In the one hundred years since, the Tomb has been completed and an inscription added: “Here rests in honored glory an American soldier known but to God.” The soldier of World War I was joined by representatives of World War II, Korea, and Vietnam; Vietnam’s Unknown Soldier was eventually identified and reburied by his family. Tourists come to pay their respects and see “The Old Guard” of the U.S. Army keep watch at all hours under all conditions.

This Veterans Day, we remember the Unknown Soldiers and all who served our country on our behalf. The words of President Harding spoken at Arlington one hundred years ago can remind us today of what Veterans Day means:

On such an occasion as this, amid such a scene, our thoughts alternate between defenders living and defenders dead. A grateful Republic will be worthy of them both. Our part is to atone for the losses of heroic dead by making a better Republic for the living.