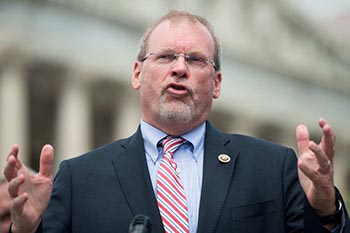 This winter, heating bills across the country are expected to increase by 17% – the highest cost in more than a decade. According to the Energy Information Administration, those who use natural gas to heat their home this winter will see a cost increase of 28%.

As readers know, unfortunately, southwest Virginia has also experienced these rising energy costs. In November of last year, folks in my district saw their utility bills increase, due to a petition filed by American Electric Power (AEP), which operates Appalachian Power Company (APCo).

In September, AEP/APCo petitioned the Virginia State Corporation Commission (SCC) to increase its fuel factor – the money necessary to recoup their costs for fuel, etc. The company said they would need to raise rates to recover approximately $279 million in revenue over a two-year period. According to AEP/APCo, the proposed rate change would result in a Virginia residential customer, who uses 1,000 kWh/month, to experience an average of $20.17 increase to their bill. That’s a whopping 15.8%.

The SCC granted AEP/APCo a temporary rate increase on November 1, 2022, stating they would review the increase and make a final decision in early 2023.

Common-sense tells us that for the winter months, when bills tend to be higher due to more energy usage, southwest Virginia residents will see increases way above $20. And that’s exactly what happened. In December, the SCC heard from AEP/APCo customers, who voiced concerns about their higher electricity bills through public comment. One customer stated, “We cannot afford to heat our home this winter because our bill is over $250, and we keep our heat at 58 degrees in the winter.”

Another customer’s public comment indicated they were going to have to turn to batteries and lanterns in order to cut their energy bill because it was so unaffordable.

For many families on tight budgets, including those who live in my district, these higher prices inevitably mean having to choose between what bills they can afford to pay. Some families won’t be able to pay them all and will have to choose between feeding their children, buying needed medicine, or keeping their house warm at night.

In a letter sent by the National Energy Assistance Directors’ Association to Senate and House leadership in September, the association stated, “About 29% of Americans who were surveyed had to reduce or forego expenses for basic household necessities to pay an energy bill in the last year, according to the U.S. Census Bureau’s Pulse Survey.”

Why have we seen heating bills increase an exorbitant amount this winter? The reason is clear: bad energy and economic policies have caused energy prices to rise.

Two years into the Biden Administration and the effects of their energy policies are on full display. On his very first day in office, President Biden signed an executive order revoking the presidential permit for the Keystone XL pipeline, which would have transported fuel from Canada into the United States. Not long after, he signed an executive order suspending all new oil and gas leases on federal lands and waters. Both actions were designed to be anti-fossil fuel, hampering domestic oil and gas production from the start.

And it’s not just Biden. During the last two years, we saw a $10 trillion increase in spending thanks to legislation passed by the Democratic-controlled House and Senate. This astronomical increase in spending led to the highest inflation the U.S. has seen in 40 years, peaking at 9.1% in June 2022. American families faced increasing costs across the board, everything from food to fertilizer to fuel. In December, year-over-year, fuel oil was up 41.5%, while electricity was up 14.3%.

Here in Washington, Republicans are focused on bringing down costs for Americans. During our second week back, I participated in a Republican House Energy and Commerce Committee roundtable, where we discussed these high energy prices, the burden it is putting on families and small business owners across the country, and what we can do here in Washington to help.

It’s time to bring down the cost of energy for Americans by enacting common-sense energy policies that encourage domestic energy development and incentivize increased production. In Congress, it’s up to us – the new Republican majority in the House – to rein in spending and put forth responsible economic policies that work toward tapering inflation.