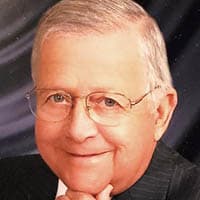 Bill met the “Love of his life” in 1955 in Salem, Va. He finally convinced her to marry him in 1959, and she became Nancy Moran Swann. They had a love of the beach and spent many days at their beach homes, fixing them up, readying them for renters, and hosting family vacations.

Bill served military time with the Army Medical Corp, which may have led to his career in pharmaceutical sales for over 37 years. Doctors and administrative assistants loved Bill. One story he often cherished was a retiring doctor’s comment to Bill that he always got the sense that Bill really cared about the doctor’s patients.

As a graduate of Virginia Tech, he was a proud Hokie. He could often be found out and about wearing his VT attire and stopping to chat with fellow Hokies he had just met.

He had a love of music and the arts, finding friendship and fellowship through singing in church choirs and quartets. As a young man, he was a student leader with the Glee Club at VA Tech, where he used his leadership role to schedule Glee Club serenade appearances at Longwood College, where his soon to be wife, Nancy, was attending.

Bill was preceded in death by his parents; and his brother, Harris K. Swann.

Services in Midlothian, Va., will be held Sunday, January 29, 2023. A Celebration of Life Service will begin at 2 p.m. at the Salisbury Presbyterian Church, 13621 W. Salisbury Rd., Midlothian, VA 23113. The family will receive friends directly after the service.

In lieu of flowers, consider donating to the SPC Friends of Music Fund by visiting https://onrealm.org/SalisburyPresby/-/form/give/now and select “Friends of Music.” Online condolences may be expressed at www.johnmoakey.com.