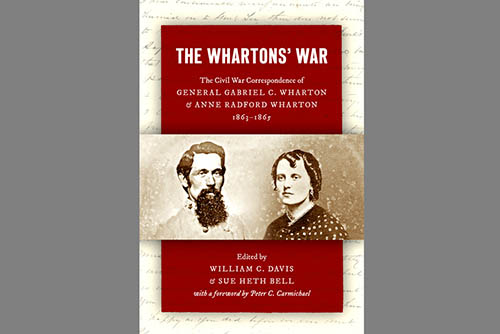 The NRCC Educational Foundation will host a book reading of personal communication between a Confederate War general and his wife on Wednesday, February 8 at 7 p.m. at New River Community College in Edwards Hall Room 117.

Davis was a professor of history at Virginia Tech and is the author or editor of more than 50 books on the Civil War and southern history. Bell is the Whartons’ great-great granddaughter. While rummaging in her parents’ garage, she discovered the cache of letters that became the foundation for this book.

The book shares letters from March 1863 to July 1865 between Confederate General Gabriel Wharton and his wife Anne Radford, who were separated by 20 years in age, by politics, and by the social classes from which they sprang, but both were highly educated, articulate, well informed, and unfailingly interesting. In 524 letters between them, writing sometimes twice or even three times a day, they illuminated their growing romance as two relative strangers got to know each other and love each other through their pens.

The letters describe with unusual candor, the Whartons’ hopes, fears, dreams, and ambitions, all against the backdrop of the devastation of war in Southwest Virginia, the Shenandoah Valley, and the Confederacy at large. In the process, they revealed themselves to be almost 21st century people; she all business, and he all about feelings. Whether discussing Victor Hugo’s latest novel, President Jefferson Davis, Abraham Lincoln, Robert E. Lee, or the conduct of the war in Southwest Virginia and East Tennessee, they were unfailingly direct and honest with each other, affording a rare window onto the minds and emotions of 19th century society in the midst of the greatest crisis of their generation.