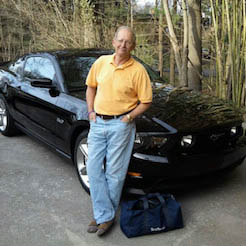 Doug loved fried fruit pies, shooting guns, spending time on most any body of water, conspiracy theories, setting off fireworks, Hunter S. Thompson, Hershey’s Miniatures, and Irish Whiskey – Not necessarily in that order. He was a master woodworker who single-handedly built his own fishing boat, The Terry Lee. Doug also enjoyed grilling, gardening, driving over the speed limit in his Mustang GTO, pranks, and hitting targets at thirty yards with his 38 Special.

Doug loved to tell stories and tall tales, and you could be sure that at least 50% of every story was mostly true. An active participant in mischief for longer than most, Doug loved spending time with his friends, many of whom he’d known since he was a child growing up in Radford and many more that he’d meet as a young adult coaching Radford High School track and the Belle Heath Bulldogs’ football team. Doug’s attitude was always one of ‘the more the merrier’ and he was particularly close to those who attended the Grant’s Annual Christmas Party or shared kinship in the Cockroach Club.

Doug was a gifted sprinter, and loved running track for his beloved Bobcats, where he would earn the nickname Flash. One year during a snowstorm, Doug was lecturing some kids about throwing snowballs when a neighborhood teen hauled off and hit him in the side of the head with one. Never one to have more bark than bite, Flash gave chase and tackled that teen right onto a snow-covered Arnold Avenue where he proceeded to stuff handfuls of snow down the young man’s shirt and coat laughing all the while. Doug always said, “if you’re going to be dumb, you had better be tough” and by his telling, he would live out both sides of this credo during his lifetime.

Doug would spend some of his early adult life in Charlottesville and Maryland before moving back to Radford with his young family. It was in Radford where he’d start his lifelong career in banking at First and Merchants National Bank and become a part of Friendly and Wendly with some lifelong friends. Banking would be his bread and butter and shenanigans with friends would be his joy. Friendly and Wendly would go on to plan and participate in many parties and gatherings in the New River Valley area over the years, and Doug would be a part of them all.

Doug would marry the love of his life (Terry) and move to Savannah, Georgia in the early 90’s. Savannah would become his second home and where he’d know many professional successes as a commercial loan officer for Suntrust Bank. This move would lead to even more treasured friendships through work, church, and by frequenting his favorite watering hole, Jen’s and Friends. Savannah is also where he’d develop a love for restoring stained glass windows and antique furniture, as well as Birkenstock sandals. The latter of which he would wear year-round to the surprise of all who knew him. He and Terry were able to travel extensively and would celebrate many shared passions such as cooking, gardening, and spending time on Tybee Island.

Doug once said that knowing when to make an exit was the mark of a great time and left a little mystery to the imagination of others. He didn’t believe in drawn out goodbyes and he had no tolerance for sentimentality. He prided himself on enjoying his time and spending time where and with those he liked. He’d want to be remembered as he lived; pouring a drink, enjoying the view, and skirting the line of decorum when possible.

A celebration of life memorial will be held at Mullins Funeral Home on Saturday, May 21st from 4:00-6:00 p.m., and a graveside service will be held at West View Cemetery in Radford on Tuesday, May 24th at 11:00 a.m.

The McCoy family is in the care of Mullins Funeral Home & Crematory in Radford. www.mullinsfuneralhome.com