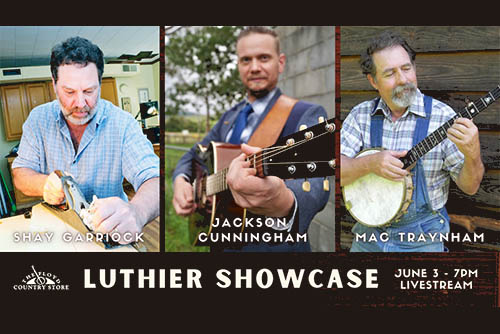 With a year that looks to be full of new opportunities, we’ve decided to celebrate the people who make the music possible: our local luthiers! There are so many talented and creative instrument builders in our area that we couldn’t spotlight them all in one event, so join us this Thursday at 7 pm (online only) to kick off our first Luthier Showcase, with Shay Garriock, Jackson Cunningham, and Mac Traynham.

We’ll spend the first part of the hour getting to know these instrument builders with a presentation and Q&A with our virtual audience, and wrap up the night with a set of music. Not only can they build instruments, but they are also masters of playing them!

The presentation will include a musical set from these great musicians and builders!
WATCH ON YOUTUBE | WATCH ON FACEBOOK

About Shay Garriock
Shay has been doing repairs and restorations since 2008 and began making violins in 2010. His skills and experience as a woodworker go back to his many years in school woodworking shop starting in 6th grade and through high school. His training as a luthier has come form workshops, books, other violin makers, and lots of experimentation. His focus has been to make copies of Italian makers Guarneri and Stradivari, but with a little of his own style thrown in. His latest violin project is a copy of a beautiful sounding German Hopf style violin from the early 1900s. He has made over 20 violins and generally completes 4-5 violins a year.
http://www.sgmcviolins.com/

About Jackson Cunnningham
Jackson grew up in a home where music and woodworking were a way of life. His father was a master craftsman and these skills were passed down at a very young age. Family ties and a love of music brought Jackson to Southwestern Virginia where he began building instruments full time with the generous help of many local luthiers. His driving inspiration has always been the instruments his musical heroes used to perform classic American roots music.

After 15 years, the shop remains a one-man operation and handwork is still the foundation of each build. From selection of tonewoods, construction, custom neck profiles, and down to the final fit, finish and setup, Jackson ensures each step is taken with meticulous care. His instruments are sought after by collectors, and have been played by musicians on stages around the globe. They have also been featured at the world’s premier instrument retailers, including Gruhn’s Guitars in Nashville, Tennessee and Folkway Music in Ontario, Canada.
https://www.facebook.com/CunninghamHandmadeInstruments/

About Mac Traynham
Mac Traynham of Floyd County, Virginia became interested in handmade instruments in 1975 when he commissioned a friend to build him a Gibson RB-100 copy on which to play a three-finger style of bluegrass and other experimental music. He became even more interested after commissioning Wayne Henderson to build him a Martin D-28 style guitar in 1976. Being attracted to beautiful woods and a serious player of Southwest Virginia style clawhammer banjo music, Mac built his first banjo in 1978 using recycled birds-eye maple flooring that had been previously made into a door. During the late 70’s and early 80’s he continued to make banjos and was part of an instrument makers seminar at the 1981 National Folk Festival. Being interested in all aspects of instrument making and playing, he visited the shops of and got tips from many of the area’s renown instrument makers including Olen Gardner, Kyle Creed, Arthur Conner, Albert Hash, and Wayne Henderson. Over the years, he has experimented with classic tone designs and today is known for making beautiful banjos that have a superior tone. In 2009, he was a master banjo maker as part of the Virginia Foundation for Humanities program.