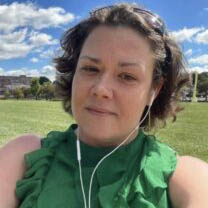 LeeAnn Amber Haun (formerly LeeAnn Anderson) departed from this world on June 22, 2022, in Roanoke, Virginia. She leaves behind numerous family members and friends to cherish her memory.

She is survived by her father John Haun, his wife Rosemary, and their son Christopher, of Tazewell; her sisters, Crystal Haun and Tabitha Justice; her brother J.T. Haun; and two beloved daughters, Hailey Anderson and Jordan Anderson, whom she missed deeply and thought of often. She was preceded in death by her mother, Doris Ann Money, and her grandparents, Frances Holiway, Rita Haun, and Daniel Nelson Haun.

LeeAnn was born September 17, 1984, and raised in McDowell County, WV. She spent her childhood learning to fend for herself, she sometimes said. She was the second middle child and often found herself on the fringes of activity, until she blossomed into a vivacious social butterfly, endearing herself to the hearts of many. She treasured meeting new people and being able to care for others. Her memories were her greatest treasures, however. Her favorite memories were of her daughters, and of her paternal grandmother’s love for her.

She was Granny Rita’s “little China doll,” and Amber took up a family gauntlet by learning to make her homemade buttermilk biscuits. LeeAnn Amber played one final game of sibling Monopoly as a complete set with her sisters and brother in the wake of their mother’s death in 2007. She spent the last few years of her life searching for self-fulfillment and healing, and found much brokenness and heartache along the way. Nevertheless, she touched the lives of many people throughout her life, and her desire for adventure took her across the United States.

Amber knew she was a sinner and knew Christ is the only Savior. Over the course of her life, she was reminded often of the love of the One, True God of Creation, who sent His Son, Jesus Christ, to fulfill all the righteousness humanity has forsaken, even submitting Himself in our place to suffer the wrath we deserve. Justice was satisfied through His self-sacrificial, substitutionary death, so mercy can be extended to sinners seeking peace with Him. Christ died and overcame even death, so that all who turn from a life of selfishness to seek God’s will in all humility can receive forgiveness and healing for their souls. His appeal still stands, “Come to Me, all who are weary and heavy-laden, and I will give you rest.” (Matthew 11:28)

A memorial service will be held for LeeAnn at Pure in Heart Ministries, in Tazewell, VA, on Saturday, August 13, at 12:00 pm. Online condolences may be sent to the family by visiting www.seaglefuneralhome.com Local arrangements by Seagle Funeral Home, Pulaski. 540-980-1700