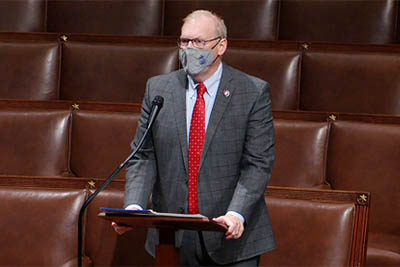 Congressman Morgan Griffith (R-VA) today spoke on the House floor on behalf of his bill, H.R. 2614, the Compact Federal District Act, which was offered as the Republican motion to recommit H.R. 51 with instructions.

D.C. statehood is unconstitutional. Both Republican and Democrat administrations have long interpreted the Constitution in that fashion.

Retrocession is our best course of action today.

Shrinking the seat of government, which is permitted by Article I, and returning the rest to Maryland for purposes of representation offers D.C. residents a voice in the federal legislative branch and keeps faith with Maryland’s original cession of land for D.C., and works within the bounds of the Constitution.

I have also taken great care to make the retrocession and the transfer of administrative functions from D.C. to Maryland as smooth as possible.

Worried about the details of D.C. government? This bill takes care of them. As the old Prego commercials said, “It’s in there!”

Congressional representation? It’s in there!

The courts? It’s in there!

The National Guard? It’s in there?

Commitments to retirees? It’s in there!

Tuition assistance? It’s in there!

Preventing the remaining federal district from casting the three electoral votes meant for D.C.? It’s in there!

My bill is the most practicable solution to giving D.C. residents a voice in Congress.

Mister Speaker, if we adopt the Motion to Recommit, we will instruct the Committee on Oversight and Reform to consider my amendment to H.R. 51 to provide for the retrocession of land to the state of Maryland, rather than create a new state. I ask unanimous consent to insert the text of the amendment in the Record immediately prior to the vote on the Motion to Recommit.