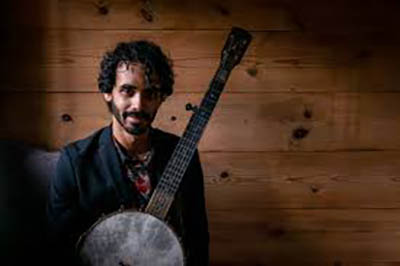 Jake Blount is an award-winning banjoist, fiddler, singer, and ethnomusicologist based in Providence, RI. He is half of the internationally touring duo Tui, a 2020 Strathmore Artist in Residence, and a board member of Bluegrass Pride. He is a 2020 recipient of the Steve Martin Banjo Prize. Blount specializes in the music of Black communities in the southeastern United States, and in the regional style of the Finger Lakes.

His first full-length solo album, Spider Tales, is out now on Free Dirt Records & Service Co. It debuted at #2 on the Billboard Bluegrass Chart, received positive coverage from NPR, Rolling Stone, and Billboard among others, and earned five out of five stars as The Guardian’s Folk Album of the Month.

Watch Jake perform “Boll Weevil” at County Sales and make plans to see the Jake Blount Band perform LIVE at the Floyd Country Store on Sunday, August 29, 2021, at 7:30 pm. Tickets are $15 advance/$20 day of the show and available for sale online and in-store.