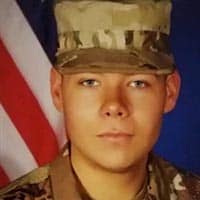 Tyrell is survived by his mother, Sarah Hannett; father, Richard Younger; brother, Andrew Hannett; his nana, Evelyn Hannett; aunts and uncles, Gordon and Lorna Hannett, Mark and Melissa Hannett, Eric and Robyn Hannett, Jermaine Farrow and Natasha Farrow; he is also survived by many cousins; Ty also had many special friends located here in his hometown of Christiansburg, Virginia along with many special friends in Kansas at Fort Leavenworth where he was stationed at the time of his passing.

Tyrell joined the Army in November of 2017. He was stationed to Army Post in April of 2018. During his service Tyrell was awarded the National Defense Service medal, the Global War on Terrorism Service Medal, and the Army Service Ribbon.

The family will receive friends on Sunday, June 15, 2019 from 12:00 to 2:00 p.m. at Horne Funeral Home in Christiansburg, VA. Funeral services and military honors will follow in the funeral home chapel.