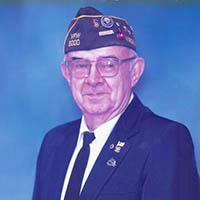 Walter Weindel (Doc) Wymer, 90 of Pearisburg, VA passed from this life on Thursday, November 19, 2020 with his daughters at his side. Walter was born on August 5, 1930 in Marion, Va. and was a son of the late James Rome Wymer and Bessie Mae Carrico Wymer. He was the last surviving sibling of one brother and three sisters.

He lived most of his life in Pearisburg, VA, and enjoyed his last few years at The Havens assisted living facility in Princeton, WV. He retired after 43 years from the Celanese Corp. in Narrows. He proudly served in the U.S. Army during the Korean War. He was a member of the American Legion for 24 years, where he volunteered his time to participate in military funerals to honor other veterans. He was a member of the VFW, and the Pearisburg Moose Lodge. He was a longtime member of the Wellness Center in Pearisburg, which he enjoyed into is mid-eighties.

Funeral services will be conducted Monday, November 23, 2020 at 1pm at the Givens – Riffe funeral chapel with Rodney Hamblin officiating with burial following in the Birchlawn Burial Park in Pearisburg. The family will receive family and friends at the funeral home from noon to 1pm. Memorial donations may be made to the Disabled American Veterans.

We will be observing COVID-19 restrictions, please wear a mask and observe social distancing. The family is being served by Givens – Riffe Funeral Service in Narrows, (540) 726-2442, and online at riffefuneralservice.com.