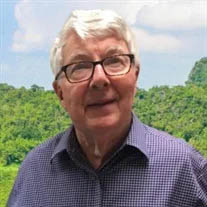 He met the love of his life, Barbara (Petersen), at age 19 and spent 57 wonder-full years together. Bob was an amazing dad to Elliott (Cindy), Catherine (Jason), and Brian (Carrie) and loving Grandpa/Poppy to Chloe, Jack, Mia, and Eva. He was preceded in death by his parents, brother Gary, and dog Resi.

Bob was professor emeritus of the Virginia Tech Department of Mathematics. Recipient of the Woodrow Wilson Fellowship, he was a proud graduate of the University of Minnesota (BA) and the University of Wisconsin (MA, PhD) with degrees in Mathematics. After working 8 years at the University of Missouri, Bob taught math, advised students, and conducted research at Virginia Tech for 31 years. He published 36 papers in a research program supported by the National Science Foundation and the Air Force Office of Scientific Research and delivered 39 invited conference lectures and colloquia in five countries. Bob’s passion for education led to his participation in math curriculum improvements, including calculus reform efforts to strengthen ties between engineering and mathematics curricula, and the development of computer-aided instruction.

In addition to his prodigious career, Bob was a devoted husband and together with Barbara they built a life for their family in the Blacksburg community. He enjoyed traveling with Barbara, served as Scoutmaster for Troop 706, never missed his kids’ soccer games or track meets, and learned countless new skills to be involved in his wife and kids’ lives. He was always a willing book reader or game player for his grandchildren. A caring and friendly man, Bob was quick to smile and chuckle at a good joke. He was a member of St. Mary’s Catholic Church for 41 years and an avid Hokie sports fan. Bob volunteered at the Montgomery County Christmas Store and was an active member of the Blacksburg Kiwanis Club where he especially enjoyed reading to Prices Fork Elementary School preschool students. He kept in touch with his Minnesota roots and was a continuing presence in the lives of his nieces, nephews, and cousin.

Whether it was career or personal, Bob held himself to the highest standard, always gave 100-percent and made sure things were done right. He lived life well (or half decent as he would say) and did everything he could for people and things he cared about without fanfare. His support and patience were unwavering; he provided quiet and steady leadership and encouragement to those who needed it. He loved his wife, his children and their spouses, grandchildren, friends, and his dogs and they knew it.

A family service was held June 8; a memorial for friends and colleagues will be held at a later date. In lieu of flowers, donations in memory of Bob can be made to the Blacksburg Kiwanis Club Foundation to support a food pantry for preschool students and their siblings at local elementary schools. Arrangements by McCoy Funeral Home, Blacksburg.