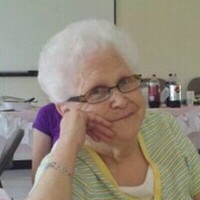 Nancy Carroll Jarrett Waddell, 88, passed away on November 21, 2020, in Radford, Virginia. Nancy was born on March 17, 1932, in Bluefield, W.Va., to her parents Edna and Elmo Jarrett who preceded her in death.

On August 29, 1948, Nancy became the bride to the love of her life James C. Waddell, Sr. Their marriage was the beginning of their story which spanned 61 years until James’ death in 2009. She was also preceded in death by a son, Jeffrey A. Waddell on July 11, 2020.

Nancy raised seven children and instilled in each the values of hard work, determination, and love for family. She also gave them wings to fly so that they could live their lives in a way that was true to themselves.

A longtime resident of Fairlawn, Nancy worked at Riverlawn Elementary School for 30 years. Nancy enjoyed knitting and crocheting. She was a talented crafter, an amazing cook, and a homemaker.

She kept going and never allowed her health to stop her from spending time with her great loves – her children, grandchildren and great grandchildren – who were her everything.

Graveside services will be held at 1 p.m. on Friday, November 27, 2020 in the Highland Memory Gardens in Dublin with William Ratcliffe officiating.

The Waddell family is in the care of Mullins Funeral Home & Crematory in Radford, Virginia. www.mullinsfuneralhome.com