The Hyde Amendment Protects Life and Freedom of Conscience 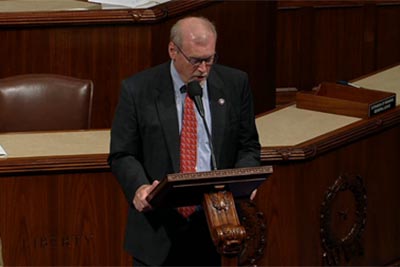 Congressman Morgan Griffith (R-VA) delivered remarks on the floor of the U.S. House of Representatives defending the Hyde Amendment and advocating H.R. 18, the No Taxpayer Funding for Abortion Act.

Below is a transcript of Griffith’s remarks:

Madam Speaker, the Hyde Amendment respects the deeply held beliefs of pro-life people like me by not spending our tax dollars to pay for abortions.

But support for the Hyde Amendment goes beyond the pro-life community.

It has enjoyed broad bipartisan support during most of its 45-year history, previously including the current Democrat in the Oval Office.

That’s because it respects a cherished American value: freedom of conscience regarding our deepest religious beliefs.

Now, that freedom is under attack by the radicals running this country.

Their assault on the Hyde Amendment threatens to undo this important protection for the lives of millions and the consciences of millions more.

That’s why we need H.R. 18, the No Taxpayer Funding for Abortion Act.

The Madam Speaker, I ask unanimous consent that the committees on Energy and Commerce, Ways and Means, and the Judiciary be discharged from further consideration of H.R. 18, and ask for its immediate consideration in the House.