The year 2019 has been one of commemoration in Virginia. It marks 400 years since several events that unmistakably shaped the future of our Commonwealth and our country: the arrival of women, slavery, and representative government.

Some were accomplishments in which we should take great pride, such as the institution of the Virginia House of Burgesses and thus representative government in the New World; others inflicted sorrow and pain, such as the introduction of slavery.

As families gather to celebrate Thanksgiving in 2019, as we do on the fourth Thursday of each November, it may be appropriate to ponder another Virginia milestone: 400 years since the first American Thanksgiving. 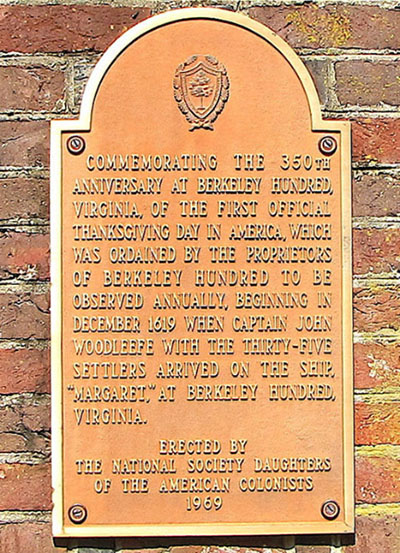 Most Americans recall the story of the Pilgrims who crossed the Atlantic on the Mayflower in 1620 and arrived in what is now Massachusetts – although their original destination was Virginia. After a difficult year establishing Plymouth Colony, they held a Thanksgiving feast with the Native Americans who had been indispensable to the colony’s survival.

Without doubt, the Thanksgiving in Plymouth was an important event in American history. It simply wasn’t the first Thanksgiving.

A year before the Pilgrims departed for North America, a group of 35 settlers and their leader, Captain John Woodlief, set sail from England for the New World aboard a ship named the Margaret. They were bound for land in Virginia along the James River. This settlement would be known as Berkeley Hundred.

The Margaret departed Bristol, England, on September 16, 1619. The 35-foot long ship took more than two months to cross the Atlantic, but its navigators, unlike the Mayflower’s, were accurate and arrived at the desired destination. It finally arrived in Chesapeake Bay on November 28. After lingering in that area for a few days, weathering a fierce storm, the Margaret arrived at Berkeley Hundred on December 4.

When the settlers disembarked, they knelt and Captain Woodlief prayed, offering words that had actually been provided by the Berkeley Company which funded the settlement: “We ordaine that this day of our ships arrival, at the place assigned for plantacon, in the land of Virginia, shall be yearly and perpetually kept holy as a day of Thanksgiving to Almighty God.”

Unlike the Thanksgiving at Plymouth in 1621, there was no feast that year. Thanksgiving was celebrated the next year with the original and additional settlers. The idea that we should set aside time for an expression of gratitude for our blessings became an American ritual.

The Berkeley settlement only lasted a few years, not surviving a conflict with local Native Americans, and so its first Thanksgiving disappeared from the history books.

In 1931, William & Mary’s former president (and son of John Tyler, the ninth president of the United States under the Constitution) Dr. Leon Tyler uncovered records of the first Thanksgiving. It entered our historical memory, but still lingers in the shadow of Plymouth.

After President John F. Kennedy issued his Thanksgiving proclamation in 1962 and said Plymouth was the site of the first, a former Virginia state senator named John J. Wicker Jr. (D-Richmond) contacted the White House to complain. Sure enough, in the next year’s proclamation, President Kennedy included Virginia as well as Massachusetts, his home state.

Much has changed since that first gathering at Berkeley Hundred. Those settlers offered thanks for crossing an ocean and arriving in a wilderness far from home. Today, most of us enjoy Thanksgiving surrounded by family in our home or that of a relative. The feast has become a centerpiece when Berkeley Hundred’s Thanksgiving was primarily a religious observance.

Nevertheless, in our yearly observance, we are still connected to that first Thanksgiving. Among the things we can be thankful for is the spirit that filled the early settlers in Virginia and in Massachusetts – their daring in leaving their homes, their persistence in enduring the hardships of life in the early settlements, and their foresight in establishing the institutions and customs that would build our great country.

So as we have done in Virginia for 400 years, on this Thanksgiving, let us take stock of our blessings and together offer our gratitude for them to God.