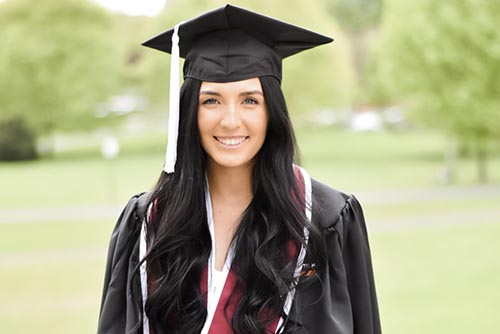 Freedom Alliance, a charitable organization which supports our nation’s military families and injured servicemembers, has named Julia Morris, a 2020 graduate of Virginia Tech, as this year’s Scholarship Student Ambassador. Julia is one of 499 students who are currently receiving scholarships from Freedom Alliance.

Julia is the daughter of Captain James J. Morris, a native of New York and a graduate of SUNY Oneonta. James Morris was commissioned as a Marine 2nd Lieutenant in July 1990, graduated The Basic School, and then began his flight training in Pensacola, Florida. James was trained to fly both rotary and fixed wing aircraft and deployed twice to Okinawa, Japan. Captain Morris lost his life 20 years ago this month when his plane crashed in a training accident. He was serving as a flight instructor at the time.

Julia was two years old when she lost her father. She is now a graduate of Virginia Tech University where she completed three majors: Sociology, Criminology, and Psychology. She has consistently earned her way onto the Dean’s List throughout her college career. Like her father, Julia aspires to serve our country, and her dream is to work for the FBI. Her brother James is also on scholarship with Freedom Alliance and attends UCLA as a theater major.

“I feel very grateful to have been given a Freedom Alliance Scholarship,” Julia explained, “because it helped me financially, but it has also connected me with a community of people who can relate to me and who have been through a similar experience. I feel like I have a whole new family and support system, not only in the other students I have met, but in the gracious people who work at Freedom Alliance. It also shows me that my father’s sacrifice will not be forgotten.”

“I’m pleased to have Julia as our Ambassador,” said Freedom Alliance President Tom Kilgannon. “She worked hard and finished strong during one of the most challenging times our country has faced,” he said. “As our Student Ambassador, Julia will speak to the public about the importance of education and the need for scholarship assistance,” he said.

An estimated 7,000 children who lost a parent in Operations Enduring Freedom or Iraqi Freedom may be eligible for the Freedom Alliance Scholarship which is now accepting applications for the upcoming academic year at www.FAScholarship.com.