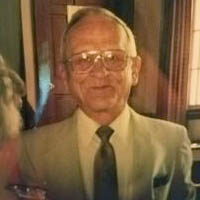 Patrick Curren Surratt, age 90 of Pulaski, died late Wednesday evening, September 23, 2020 at Lewis Gale Hospital – Pulaski. He was born on September 2, 1930 in Pulaski, and was the son of the late Martha Virginia Gott Surratt and the late Benjamin Franklin Surratt.

“Pat” retired from the Pulaski County Department of Social Services as an eligibility tech. He was a veteran of the U.S. Army, having served during the Korean War. He was a member of the First Christian Church (DOC) in Pulaski.

Funeral services will be held Monday, September 28, 2020 at 2:00 p.m. at Seagle Funeral Home with the Rev. Dr. John Dunston officiating. Interment will follow in Oakwood Cemetery with military honors.