Striving to be a Better Nation 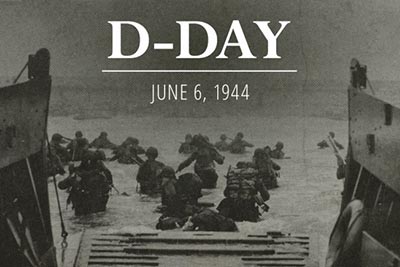 June 6 was the 76th anniversary of the D-Day landings, when Allied forces landed on the beaches of Normandy.

Dwight D. Eisenhower, the Supreme Allied Commander in Europe who oversaw the landings, called D-Day a “great and noble undertaking.” Indeed, it was among the greatest undertakings in history, an enormous and complex operation of men and machinery moving toward the goal of freeing Europe from the racist genocidal tyranny of the Nazi German regime.

Appropriately, many of the names and events from that day hold an honored place in our society.

Within ten years, Eisenhower became president. Movies such as The Longest Day and Saving Private Ryan depicted the events of that day with big stars including John Wayne and Tom Hanks portraying its heroes. Many of its commemorations, such as the 75th anniversary I attended last year, drew heads of state, veterans, and other dignitaries from all over the world. A national memorial not far from us, in Bedford, tells the story of the day.

But some of the names of that day, whose deeds were no less heroic than the others, were largely forgotten.

In World War II, the U.S. Armed Forces were still segregated. The only African American unit to take part in the D-Day invasion was the 320th Barrage Balloon Battalion.

Barrage balloons were important air defenses during the war, raised to interfere with air raids over potential targets.

The 320th had trained at Camp Tyson, Tennessee, learning how to inflate, handle, and maintain the balloons. Before setting sail for Normandy from Britain, the balloons were inflated and attached to the transports. The men of the 320th were assigned to land on the beach and get the balloons aloft to foil any German air attacks on the landing zone.

They hit the beach in the first wave on the morning of June 6, 1944, coming under heavy fire from the German defenses on Utah and Omaha Beaches. Many of the balloons were destroyed and the men scattered in the disorder and chaos of the initial assault. But one balloon was over Omaha Beach by midnight, and twelve by the dawn of the next morning.

The barrage balloons were shot down by the Germans, but more were put up over Omaha and Utah Beaches and interfered with German counterattacks as Allied ships offloaded more men and equipment to advance the liberation of Europe. The work of the 320th Barrage Balloon Battalion helped make victory possible.

Because of their bravery and tenacity, and the bravery and tenacity of other African American units, President Harry S. Truman rightfully began desegregating the Armed Forces in 1948. Still, many of these servicemen were not honored to the same degree as their comrades in arms.

Bill Dabney of Roanoke County was one member of the 320th. He returned home after the war and set up a flooring business. Like many veterans, he did not talk much about his experience, but after returning to Normandy for the 60th anniversary in 2004, he shared his story and those of his fellow veterans in the 320th, which were eventually featured in the book Forgotten by Linda Hervieux.

So many decades should not have passed before Bill Dabney and his comrades were honored, but discrimination lingered, to the detriment of their honorable service.

But his story showed progress in our society, too. Although the wait was unjust, he was eventually recognized, and in 2009 received the French Legion of Honor. Linda Hervieux recounts in Forgotten that after that ceremony, Mr. Dabney met Steven Spielberg and Tom Hanks, director and star of Saving Private Ryan, which did not include any of the 320th’s story.

As with every black veteran I met, Bill was well aware that the movie failed to show any African Americans on Omaha Beach.

No matter. Bill Dabney knew he’d been there.

As the death of George Floyd made clear last month, discrimination still lingers. More work must be done.

Many have protested peacefully, making their views known. Peaceful protest was integral to the civil rights movement, and I hope that more advances can be made today.

It took generations of Americans to declare, and then to make real progress toward achieving, our foundational belief that all men and women are created equal. It is up to all of us to carry on that work.