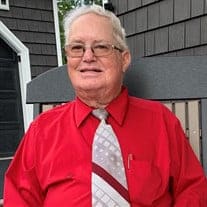 Charlie Eugene Spencer, of Pilot, born August 8, 1939 to Charles and Clara Coleman Spencer. Left this earthy life to his heavenly home to meet his precious Tenny (Christine Eanes married November 26, 1960) on Tuesday January 11, 2022 at the age 82.

He was retired from Montgomery Furniture. After retiring he joined his son Ronald, working in Spencer’s Chimney Sweep, driving for Montgomery County School System and his greatest love of farming. He was the pastor of Bible Truth Tabernacle in Shawsville VA for forty one years. His greatest loves was to testify to everyone about his Lord Jesus Christ and all he had done for him in his life and The Message of the Hour. Then to tell everyone about the Love of his family.

A funeral service will be held on Saturday, January 22, 2022 at 2:00 p.m. in the McCoy Funeral Home Chapel with Pastor Ronald Spencer and Pastor Mark Spencer officiating. Interment will follow at Sunset Cemetery, Christiansburg. The family will receive friends from 1-2 p.m. at McCoy Funeral Home prior to the service.