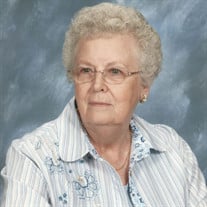 Marie lived in Christiansburg until 1960, when she and her husband Bill, who worked for the Federal government, were transferred to Altus, Oklahoma, then to Alexandria, Virginia. In 1963 they were transferred to Missouri and in 1964 they were sent to Grand Forks, North Dakota. In 1966, they went back to Alexandria, Virginia where Bill retired in 1980.

Following Bill’s death Marie moved to Missouri to be near her children, but she soon returned to the mountains of Virginia she loved so much.