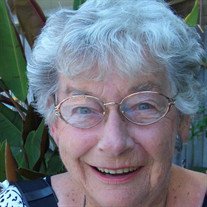 She grew up in Elizabeth City, NC, where she graduated from high school. She attended Duke University, where she graduated with a R.N. degree in 1947. She met her future husband, Frank Scott, while both were working on the psychiatric ward at Duke University Hospital. Jean helped supported their family as he completed his DEd at the University of Georgia. Subsequently they lived in Hiwasee, TN, Gainesville, GA, Athens, GA, Greeneville, NC, Wise, VA, and finally Radford, VA. In Radford Jean resumed her nursing career, working as a psychiatric nurse at St. Alban’s Hospital. In retirement Jean and Frank moved to Floyd, VA, and then to Warm Hearth in Blacksburg.

She was preceded in death by her husband of 50 years, Frank Alexander Scott, and by two sisters, Alice Daniels and Ruth Hallman. She is survived by her daughters and sons-in-law Linda Scott and Tom Woodard of Blacksburg and Betsy Scott and William Baker of Fort Walton Beach, FL; her son and daughter-in-law Frank Alexander, Jr. and Alexis Scott of Lexington, KY; six grandchildren, Scott and Kendall Woodard, David (Jennifer) and Alex (Crystal) Scott, and Brian and Matthew Ford; and six great-grandchildren, Lila and Margo Scott, Wesley, Thomas, and Helen Scott, and Easton Ford. She also leaves behind special friend Mary Miller and her many friends who cared for her at the Kroontje Health Care Center.

A private memorial service will be held at McCoy Funeral Home with burial to follow in Sherwood Memorial Park, Salem. In lieu of flowers, memorial contributions may be made to Warm Hearth Employee Emergency Assistance Fund or Employee Growth and Development Fund. Arrangements by McCoy Funeral Home, Blacksburg.