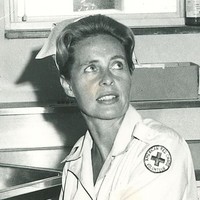 During the terrible times of World War II, Marianne met her husband, Anatol, who studied to become a physician. He was not a native speaker of German, so Marianne translated his medical textbooks for him. Together with their young son, they left Germany for Venezuela, where they attended to the medical needs of indigenous Indians in San Fernando de Atabapo, Amazonas Territory, where they faced piranhas, giant snakes, scorpions, and primitive living conditions.

In 1955, they moved to Toronto, Canada and immigrated to the United States, where they resided in Rochester, New York. After two years in Richmond, Virginia, they moved to Radford, where Marianne spent nearly five decades as a hospital and Red Cross volunteer at Radford Community Hospital and Carilion New River Medical Center. She was known to many as the Wednesday morning lady who greeted visitors to the hospital. She was also active in the Red Cross Blood Drives in Radford. An avid gardener, Marianne was also known as an incredible cook.

She is survived by her son, Bill Ryplansky, daughter-in-law, Karen Hines, and her daughter, Cristina Ryplansky.

A private memorial service is planned.

In lieu of flowers or donations, we ask that you honor Marianne’s memory by extending a kindness to someone.

The Ryplansky family is in the care of Mullins Funeral Home & Crematory in Radford, Virginia.