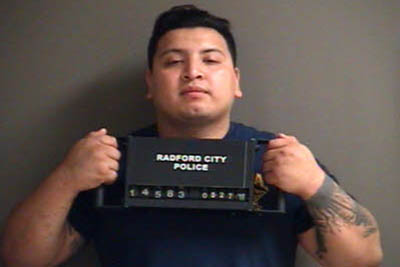 On Monday, June 22, 2020 at 9:15 p.m. Radford City Police Officers responded to the 300 block of Third Avenue to investigate a report of domestic violence. Arriving officers found a female victim that had been assaulted by her live-in boyfriend. The victim had been pinned to the ground, struck several times, and was physically kept from being able to leave the residence or call for emergency services. The victim was able to kick out a bedroom window screen, escape, and summon help from a passerby. The victim was treated at the scene by Radford Fire and EMS personnel for minor injuries.

He was treated & released at New River Valley Medical Center for dog bites from the couple’s dog received during the incident. Robson has been remanded to the New River Valley Regional Jail without bond.