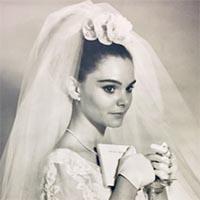 She spent most of her early years in DeLand, FL, where once as a toddler she slipped out of a screened door and wandered into a classroom at Stetson University, making the papers as “youngest co-ed.” Her family moved from Florida to Wanamaker, IN, in the 1950s. There, she made lifelong friends with Marie Hegarty and her sisters, with whom she spent many happy days. After graduating from Our Lady of Grace Academy in 1961, she joined her Uncle Don McLaughlin, Aunt Ginny, and cousins Bruce and Mark in Germany, where Don was stationed, to be an au pair for the boys. With them, she traveled widely and met her future husband, Samuel G. Riley, in Germany at an officers’ club while doing the bunny hop. After returning to the U.S., Mary lived in Georgetown, attended art classes at the Corcoran, and designed window displays for Garfinkels in D.C. Through the years, she lived in Raleigh, N.C.; Philadelphia, PA; Statesboro, GA; Atlanta, GA; and Blacksburg, VA. Mary was a travel agent and a talented watercolorist, and volunteered at her church and in her community wherever she lived.