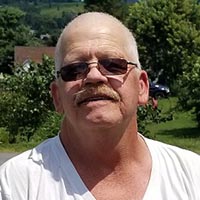 Harold Hasten Riggs, Jr., 65 of Pearisburg, VA went to be with the Lord on Wednesday, March 25, 2020 at Carilion Roanoke Memorial Hospital. Harold was born on August 7, 1954 in Columbus, OH and was a son of Carrie Belle Whittaker Barnett of Dublin and the late Harold Hasten Riggs, Sr. Besides his father, he was preceded in death by his daughter, Sheena Marie Riggs.

Harold was a U.S. Army Veteran, and then started working as a carpenter, then was employed at the Food Lion store in Pearisburg for a number of years. He attended Faith Temple Pentecostal Holiness Church in Pearisburg. He never met a stranger and he loved mowing other peopl’s yards and planting flowers.

Graveside funeral services will be held Monday, April 6, 2020 at 2pm at the Birchlawn Burial Park in Pearisburg. Online condolences can be sent to the family at givensfuneralhome.com.