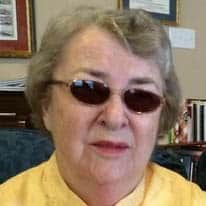 Baptized as an infant, she was confirmed by profession of faith in the Lord Jesus Christ into the adult membership of Home Moravian Church of Winston-Salem in 1950. Studying at Ardmore Elementary and Reynolds High School, she graduated from Greensboro College with a degree in Elementary Education before marrying William Nevyn Rankin III in Home Moravian Church on June 18, 1960 and taking his name.

Diagnosed with Retinitis Pigmentosa at age 10 due to night blindness, Susan Rankin experienced a full life both in the light and in the dark. The progressive blindness that engulfed her was handled with grace: Susan always trusted God and His providence, resting on the fact that her special burden was for some greater purpose which the Lord knew.

As her husband declined with Multiple Sclerosis soon after their marriage, Susan cared for him with determined hope. After he suffered life-threatening burns followed by a surprising recovery, he had the privilege of returning the favor of caregiving, as she progressively lost her sight. She both gave and received care with a Christ-like spirit.

After her husband was diagnosed with cancer, Susan was cared for by her son and daughter-in-law for over seven years in their home in Katy, Texas and then Radford, Virginia. “I am now your child,” Susan declared, insisting on giving a Father’s Day card each year to her son. “You are my special angel,” she praised her devoted daughter-in-law. In recent months, she required full-time nursing care in Pulaski Health & Rehabilitation Center in Pulaski, Virginia.

Susan Rankin was a homemaker who cared for her family with great skill, enjoyed yard work, and served in First Church Aiken with heartfelt zeal. She taught children’s Sunday School, led children’s music, supported the Women in the Church (especially its Circle work), attended the Law Sunday School Class, and devoted herself to Visitation Committee calls. Her visits to area nursing homes and hospitals were a unique ministry, in which her disability prompted humble thankfulness to the Lord on the part of sighted residents and patients.

On Friday, October 15, 2021, after battling congestive heart failure, strokes, dementia, and other ailments of this life, Susan Rankin went to be with the Lord, aged 83 years. “For I am convinced that neither death, nor life, nor angels, nor principalities, nor things present, nor things to come, nor powers, nor height, nor depth, nor any other created thing, shall be able to separate us from the love of God, which is in Christ Jesus our Lord” (Romans 8:38-39).