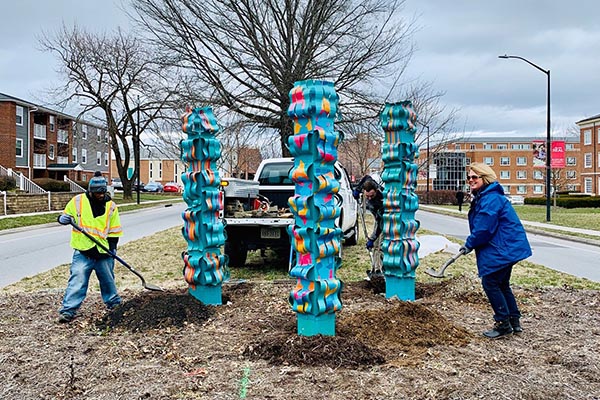 Gray winter days will be a bit brighter now that twists of colors are popping up all over the City of Radford. More than 50 pieces of artwork that once graced the Channel Gardens at New York City’s iconic Rockefeller Center are being installed throughout the municipality’s residential, business and governmental districts.

The art is by international painter and sculptor Dorothy Gillespie, who grew up in Roanoke and was instrumental in helping Radford University create its permanent art collection and often lectured in her role as Distinguished Professor of Art. Gillespie, who passed away in 2012, also was known for sharing her expertise with art organizations throughout the region.

The exhibit of brightly colored, enamel-painted aluminum sculptures features soaring spirals, starbursts and panels and will be on view through early June 2020.

“We’re so delighted to be part of the Dorothy Gillespie Centennial Exhibition taking place throughout the U.S.,” says Deborah Cooney, city Tourism director. Cooney noted that Radford is indebted to Dorothy’s son, Gary Israel, for loaning the incredible collection. “Mr. Israel has been supportive of the city’s public art program from its initiation and, in fact, loaned Glencoe Mansion a work to install at the Mary Draper Ingles Cultural Heritage Park a couple of years ago.” 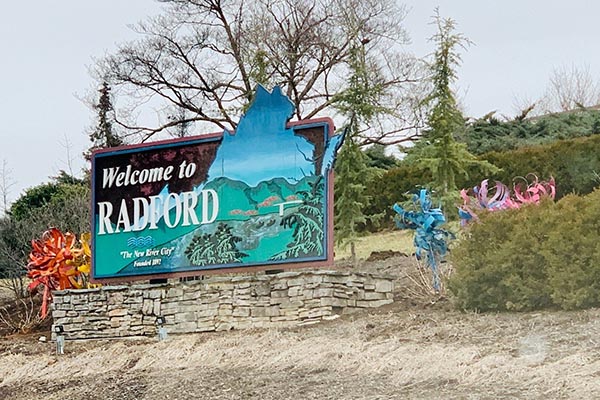 According to her official biography, after earning a degree at the Maryland Institute of Art, Gillespie arrived in New York City in 1943. Although she started as a traditional painter-on-canvas, she began experimenting with abstraction in the 50s and 60s. By the 1970s she developed her trademark style of painting colorful abstract forms on metal. The pieces were then cut and shaped into willowy ribbon-like works that became both painting and sculpture.

Gillespie’s works have appeared all over the country in both public and private spaces, in the permanent collections of notable museums such as the Guggenheim and Brooklyn museums in New York City, in airports and corporate headquarters, on the ballet stage and at Disney World’s Epcot Theme Park.

Cooney noted that the celebration of Dorothy’s works and life is especially important since it coincides with the 100th anniversary of passage of the 19th Amendment guaranteeing women’s constitutional right to vote. Gillespie herself was an important player in the women’s art movement both at the Women’s Interart Center and as a lecturer at the New School for Social Research in New York. Throughout her career she championed women artists.

Because of the playfulness of Gillespie’s artwork, Cooney said she will be working with city teachers to involve school children in the celebration. In addition, plans are underway for a special event to recognize Ms. Gillespie’s contributions with a guest presentation by her son, she added.

The Radford installation has been made possible through the efforts of the Dorothy Gillespie Foundation, the City Council and the Tourism Department with assistance from the Beautification and Municipal Forest Commission and Public Works.

Information about the public art in Radford can be found at www.VisitRadford.com/ArtTrail.