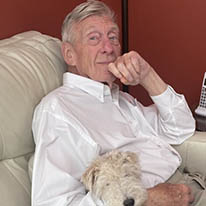 Stephen “Steve” Parson, 79, died on August 2, 2022, of pneumonia, while in the hospital in Bluffton, S.C. He was born in Shenandoah, Iowa, but claimed Des Moines, Iowa, as his hometown. He was the oldest of four children of Betty and Maurice Parson.

He went to college on a football scholarship, and it was at the University of Northern Iowa (formerly Iowa State Teachers College) that he met and married Marolyn Hollis. This year they celebrated their 59th anniversary.

He earned BA and MA degrees at Northern Iowa. While an undergraduate he joined the Tau Kappa Epsilon fraternity; these brothers remained life-long friends.

He was an educator at his core. His professional career began in Newton, Iowa, where he taught Distributive Education. From there he went to Iowa Central Community College in Fort Dodge, Iowa, to be a leader in adult education. In 1974, he was awarded a Charles Stewart Mott Foundation fellowship to pursue a doctorate at Western Michigan University. Here his passion for community education was ignited. His cohort remained his professional partners throughout his career. His book, Transforming Schools into Community Learning Centers, published in 1999, is still used as a reference in education courses around the country. After his retirement in 2007, he was the originator of the Foundation for Community Education.

Upon earning his doctorate, he was hired by Virginia Tech, where he was an administrator and Associate Professor for 30 years. He focused on community education and provided the skills needed for educators to be successful principals and superintendents. He loved everything about Virginia Tech. Go Hokies!

He cherished his two daughters, Julie Parson and Michelle O’Neil. He took pride in their accomplishments, of which there are many. He was called “Pops” by his grandson Aidan O’Neil. When speaking of Aidan, he always said “He is very smart and is going to do great things.”

He enjoyed reading the most, but his fly-in fishing trips to Saskatchewan, Canada, were legendary. In typical fashion, he bought a sailboat and then learned to sail. He loved his skiing trips to Pagosa Springs, Colo. He was proud that he learned to ski at age 40 and continued until he was 73. Of late, he enjoyed taking Cassie, his Wire Fox Terrier, on long walks.

Memorial services will be held Tuesday, August 9, 2022, at Sauls Funeral Home, 90 Simmonsville Road, Bluffton, S.C. Visitation at 1 p.m. and ceremony at 2 p.m., streaming live at www.saulsfh.com. Masks required. Burial, in Westview Cemetery in Blacksburg, Va., will be later. In lieu of flowers, please consider donating to the National Aphasia Association at www.aphasia.org.