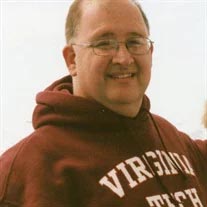 Donald Keith Osborne, 60, of Christiansburg passed away on Saturday, May 16 at UVA University Hospital. He was predeceased by his father, Jack Donald Osborne; and grandparents Murray S. and Ruth D. Atkins and Ray A. (Sr.) and Kate W. Osborne.

Don was a graduate of Fieldale-Collinsville High School (Class of 1979) and served as a volunteer member of the Fieldale-Collinsville Rescue Squad. He graduated from Ferrum College in 1981 and received a B.A. in History from Virginia Tech in 1983. An avid Hokie, he returned a few years later to pursue graduate studies in the Virginia Tech Department of History and worked with the Hokie football team as a graduate student trainer.

Don was retired from the U.S. Postal Service. He was an active member of the Virginia Rural Letter Carriers Association and proudly served at the local and state levels in various capacities, including that of State Vice President.

Due to current restrictions, funeral services will be private, with plans for a celebration of life at a later date. In lieu of flowers, the family requests that donations be made to the church or charity of your choice.