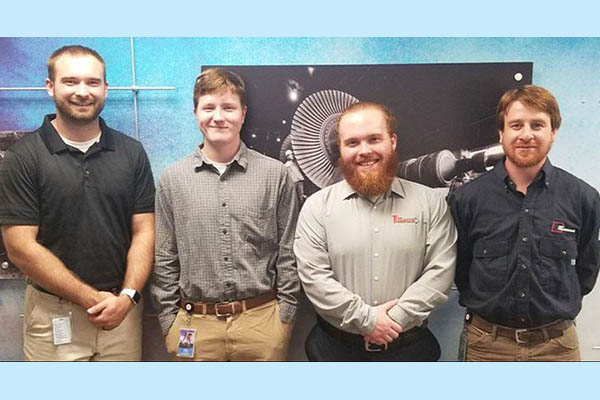 The program is designed for students who are enrolled in the second semester of NRCC’s electrical engineering technology program. The selected students work and train with AEP Transmission Operations Control Center in Roanoke for 20 hours a week while completing an associate degree. The four NRCC students completed a training program developed by AEP while shadowing the dispatchers. Training opportunity offered by AEP included books, online modules, field visits, and specialized training sessions from third parties.

Coalson, from Pulaski, says he was encouraged by his electrical engineering technology instructor, Robert Bopp, to pursue the internship because Coalson had been previously contracted with AEP from 2014-2018 as a utility forester.

“The experience with AEP has been good overall,” said Coalson. “The AEP personnel that we interact with day to day at the AEP TDC in Roanoke are awesome. They are very nice, helpful, and ready to teach us at any chance they get.”

Fread, from Accomack, says the apprenticeship has been a fantastic opportunity and that he was able to study under skilled transmission dispatchers who mentored the students in the ways of monitoring and maintaining the electric grid.

“The interesting thing about this job is that there is always something new to learn,” said Fread. “You are constantly having to adapt to new and unforeseen circumstances to effectively perform your duties as a transmission dispatcher. I have learned a great deal about our electric system through this apprenticeship.”

“Studying the transmission aspect of our power system has allowed me to gain insight on all of the other parts of the electric system from generation to distribution,” said Fread. “I plan to use the knowledge I have gained from this experience to seek employment in the electrical industry in the following years.”

“One of the greatest benefits they have offered us is the opportunity to train, study, test and become a NERC (North American Electric Reliability Corporation) certified system operator,” said Coalson. “This certification, if earned, is ours to keep outside of Apex or AEP. This is vital certification for a transmission dispatcher in the utility industry with any company in North America and is required
before you can work the desk independently (normally 3-5 years after becoming an in-house employee). AEP also provided us the opportunity to take the SOPD test (System Operator Power Dispatcher). This is also required with many utility companies in the U.S. before employment as a transmission dispatcher.”

“Congratulation to Robert, Winston, Eric and Tyler for being our first class to complete the AEP Transmission Dispatcher Apprentice Program,” said Darrell Guill with AEP. “We really didn’t know what to expect, but each of these four highly motivated students have demonstrated exactly what we hoped to gain from the apprenticeship program. Through hard work and dedication, all four were able to meet the demands of working and study in an AEP Transmission Operations Center while also completing their challenging college courses.

Delightfully, Robert and Eric were also able to obtain their System Operator Certification from the NERC during this time. These 18 months have provided ample time to ensure that this type of work is a good fit for their career aspirations and gives our supervisors and employees an opportunity to observe and work with the apprentices to ensure they are a good fit for the job. In January, the second class of five new apprentices began their journey and the early signs are that they have the ability to live up to the high standards set by Robert, Winston, Eric and Tyler.”