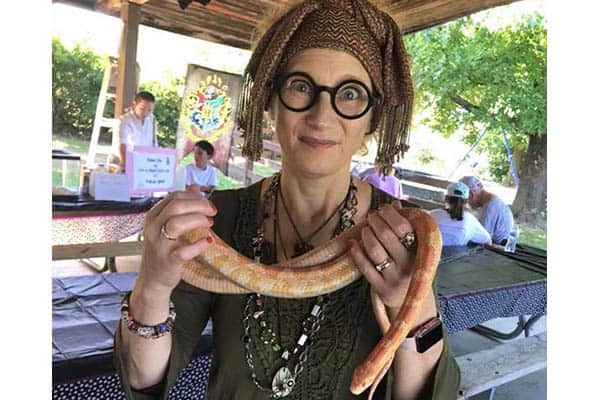 Biology professor Dr. Cindy Wynne is well known at New River Community College for her many animals that often accompany her to biology classes, including the occasional python or corn snake. But it’s Halloween each year that brings her infamous costumes to campus. For more than 20 years, Wynne has delighted students, friends and family with her “punny” costumes. That’s right—all her costumes are based on puns.

Past years’ costumes have included a set of medical scrubs with a painted-on spider web (medical website WebMD) and a Cleopatra costume covered with denial phrases such as “It wasn’t me” (Queen of De-Nile). One of her favorite costumes included a large group of friends all clad in green complete with tattoos (Gang-green).

“It’s truly endless. I do puns for everything,” said Wynne. “And if it’s a biology pun, so much the better. Those are my favorites, of course.”

Even her beloved animals have pun inspired names, including Kellogg corn snake, newts Oliva-newt and John, ball pythons Lucille Ball and Julius Squeezer, and her tarantula Quentin Tarantula. Wynne is also a member of a pun inspired Scrabble team, the Vowel Movements.

Where does such fun-loving creativity and admiration for the marriage of puns and costumes come from? She gives full credit to her father.

“My dad loves puns. Dad comes up with the best puns!” said Wynne.

When she’s not teaching, she spends time at her home in Blacksburg with her family and a menagerie of beloved pets that includes several snakes, tarantulas, snails, lizards, genetically modified fish, Madagascar hissing cockroaches, millipedes, poison dart frogs (notably non-toxic when bred in captivity), scorpions, rats, and a cat. Her rats are, of course, named after the original members of the Rat Pack. Even the crickets she raises to feed her tarantulas are all named “Francis Cricket” in honor of the biologist Francis Crick.

With the exception of her cat, Dandy Lion, her animals also serve a purpose in helping to teach various biology classroom components at NRCC.

“Everyone has a job. These are working animals. There are no free meals here,” Wynne said with a laugh.

Her Halloween costumes are always a surprise and something faculty, staff and students at NRCC look forward to each year. Graduates often check back annually to see what costume Wynne comes up with next.

“During the month of October, I think about words that have two meanings, and if they do, can I make a costume out of them? Most of my mental energy in October goes into it,” she joked.

So, what’s the “punny” costume this year?

Fans will just have to stay tuned on October 31.

Dr. Cynthia Wynne teaches Biology 101 and Biology 102 at NRCC and has taught at NRCC for more than 15 years. Her classes are available in Dublin and Christiansburg and online. She holds a bachelor of science and a master of arts in teaching degrees from UNC Chapel Hill and a doctorate from the University of Wisconsin, Madison.