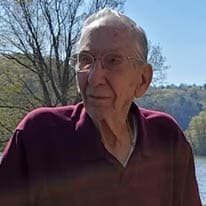 Surrounded by his loving family, Robert Lee Nester, Sr., 92, of Pine Knoll Shores, N.C. and formerly of Floyd, Va., went to be with our heavenly father on January 17, 2023.

Robert was a veteran of the United States Marine Corps, serving during the Korean War. He was a graduate of Virginia Polytechnic Institute and State University and a retiree of the Radford Army Ammunition Plant.

Robert took great pride when his children and grandchildren reached out to him for his technical expertise. He was the family’s YouTube/Google guy before there was such a thing. He loved golf, boating around the Southern Outer Banks, clamming, and gardening, but his greatest passion was spending time with his family.

Funeral services will be held at 2:00 p.m. on Sunday, January 22, 2023 at the Floyd Baptist Church with Julius Dickerson officiating. Interment will follow in Jacksonville Cemetery with Military Rites by the Marine Corps Funeral Honors. The family will receive friends from 1 p.m. until 2 p.m. prior to the service at the church.

Dad, Papa …we promise we will watch for deer and slow down so as not to get a speeding ticket. We closed the refrigerator door, turned the lights off, we made up our minds, went out the door (in or out) and closed it behind us.