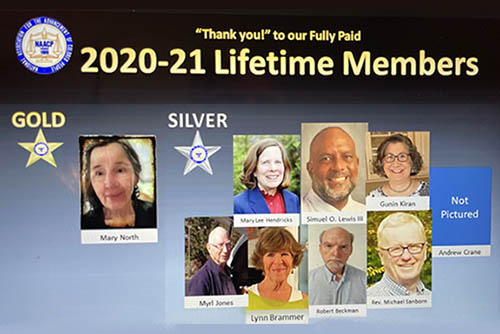 The Montgomery County-Radford City-Floyd County Branch of the NAACP held its 45th Freedom Fund Banquet on October 16th on-line. About 50 members and supporters attended. The theme “Are You with Us?” was introduced by Branch President Deborah H. Travis.

Custom Vibe, comprised of Denise Smith and Alan Johnson on vocals, and Glen Holmes on keyboards, led the singing of “Lift Every Voice and Sing,” and later performed the Curtis Mayfield classic “People Get Ready.”

The Nannie B. Hairston Community Service Award, for long-time service to the NAACP and the community, went to Dr. Wornie Reed. The award was presented by Karen Jones, Chair of the branch’s Political Action Committee, and winner of the award in 2019.

The honoree’s civil rights and racial equity work can be seen from Alabama to Tennessee to Boston and throughout the country. The mark he has made on the New River Valley is immeasurable. As a founding member of the Dialogue on Race, leading the Law Enforcement Issue Group, Dr. Reed is instrumental in the working relationship between our law enforcement and the community.

The honoree has been called upon to serve on multiple forums as the leading expert on policing issues. As a contributor to the Roanoke Tribune, weekly articles on issues regarding race, equity, inclusion, and politics help to illuminate issues and provide clarity and understanding.

Reed is Professor of Sociology and Africana Studies at Virginia Tech and is the Director of Race and Social Policy Research Center. His scholarly work includes books on employment discrimination, racial profiling, and health disparities among African Americans.

The father of two sons and husband of Mildred, Reed is a Silver Life subscribing member of this branch, has served as an Executive Committee Member-at-Large, and advisor for the VT college chapter of NAACP. He is currently a member of the board of the ACLU-VA.

Reliford Sanders introduced the program’s keynote speaker, Dr. N.L. Bishop. In 1975 Dr. Bishop became the first African-American member of the Christiansburg Police Department and served as a police officer and criminal investigator until leaving to pursue a career in healthcare administration.

In 2010, he broke another barrier by being appointed the third president and first Black President of Jefferson College of Health Sciences. Dr. Bishop’s most recent trailblazing role is as the inaugural Chief Diversity, Equity and Inclusion Officer of Carilion Clinic.

Dr. Bishop spoke on the theme “Are you with us?” He described the insurrection at our nation’s capitol last January, and recent attempts to recast this criminal event as somehow honorable or heroic.

He compared this with long-standing attempts to re-imagine the corrupt ideologies that fueled slavery and the South’s role in the Civil War as somehow ones that were virtuous and even righteous and resulted in the Civil War taking on the term, “Lost Cause”.

He talked about his decades of trying to understand that term engraved in the Confederate monument on Christiansburg’s town square. From that corner as a child watching parades, later directing traffic in his role a Christiansburg police officer, and then in daily runs by this same monument, he always questioned the term. This was while also questioning what he was taught in history classes during Jim Crow segregation and the way the inhumanity of the slavery era was minimized.

He was pleased when the request to add story boards adjacent to the Confederate monument was so well supported and unanimously passed by the Town Council, and the hopeful message it sends. Bishop asked his listeners to join him in celebrating the plan to add story-boards that will recount the local history of Black enslavement and subsequent liberation, cultural life, and the contributions that Blacks have made to local history, often through the work of the Christiansburg Institute. The speaker emphasized the importance of teaching honest and accurate history, even when it is painful to hear. The full story needs to be told.

In his role with Carilion Clinic, Bishop was instrumental in helping to roll out the Covid vaccine in Roanoke and the NRV. He was especially concerned to insure that people without easy access to computers, people who were suspicious of the vaccine, and people from a variety of backgrounds, had equal access and would show up.

In his official role as an advocate for Diversity, Equity and Inclusion, he noted its importance not only in health care, but in business and in education as well. In concluding, he challenged his audience to stay in the struggle and take a stand for values that create a world more inclusive and equitable.

He closed with a favorite quote of Dr. Martin Luther King, Jr. “Make a career of humanity. Commit yourself to the noble struggle for human rights. You will make a greater person of yourself, a greater nation of your country and a finer world to live in”.

The program concluded with inspiring words from President Travis, who thanked the sponsors, attendees and organizers of the event, and asked once again “Are you with us?” to inspire our commitment to continuing work for civil rights and the betterment of all people in the New River Valley.

The Branch usually holds its General Body meetings on the 4th Sunday of each month at 3:30pm on Zoom. All are welcome. For information on joining our meetings or joining the Branch as a member, contact dhtravis@yahoo.com. Please join us.