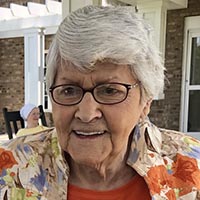 Joann Riggins McGraw, 89 of Pearisburg, VA went to be with the Lord on Wednesday, December 11, 2019 at Lewis-Gale Montgomery Hospital. Mrs. McGraw was born on March 18, 1930 in Bluefield, WV and was a daughter of the late Luther Clinton Riggins, Sr. and Virginia Elizabeth Dooley Riggins.

Mrs. McGraw was a graduate of the Beaver High School in Bluefield, WV and was a member of the Riverview Baptist Church in Ripplemead. She was a radiology technician and retired from Carilion Giles Memorial Hospital in Pearisburg.

She is survived by one daughter and son-in-law, Debra McGraw Finn and husband Peter Finn of Baltimore, MD, two sisters, Mary E. Webb of Rich Creek, Alma Robertson of Narrows and many nieces and nephews.

Funeral services will be conducted Thursday, December 12, 2019 at 11am at the Birchlawn Abby in Pearisburg with Pastor Shahn Wilburn officiating.