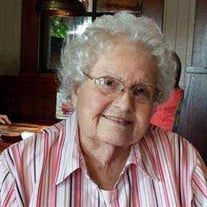 Delma Cleo McCoy went to her eternal home Monday, October 11, 2021. While she leaves a tremendous void, we rejoice with her as she sees Jesus face to face on those streets of gold. No more sickness, no more madness, no more pain.

Cleo was born March 29, 1927 to James F. and Minnie H. Thornton and was the second oldest of seven children. She lived throughout the New River Valley attending elementary and high school wherever her Dad found construction work. In 1944 in the midst of World War II, she married the love of her life, Private Jessie Lee McCoy.

Cleo worked for twenty years at Imperial Reading as a seamstress in Christiansburg and ten years at Virginia Tech in the Tailor Shop. Her focus was first her Lord, then family, and next her church family at Community Christian Church in McCoy. She served on the Missions Committee there for many years sometimes housing missionary guests of the church. She was always ready to prepare a dish to share with church visitors or a fellowship meal. She was a member of the widows group at the church. Cleo firmly believed God should be the first priority in a person’s life so she served in other areas as needed when her health allowed.

Survivors include her children Garry Lee McCoy (Cheryl); Judy McCoy Keister (Mike); and grandchildren: Ryan Keister; Julie M. Pittenturf (Chris); Brock Keister (Michelle); and Lauren K. Surface (J. T.). She is also survived by her loving and supportive siblings and spouses Carmell Miller, sister; Curtiss Thornton, brother (Barbara); Dana White, sister-in-law; and brother-in-law Frank Sheppard. In addition, she is survived by numerous nieces and nephews. In recent years, Cleo’s great-grandchildren brought her much joy! Even when she was in pain, these folks could bring a smile. They include Joshua, Caleb, and Ellia Pittenturf; Kyle and Mabry Keister; and Corbin and Aiden Surface.

We were blessed with 94 and half years with Cleo. She was thankful to all of you for loving her so well.

Funeral services will be conducted Wednesday, October 20, 2021 at 11:00 am in the Community Christian Church, McCoy, with Mr. Chris Brandow officiating. Interment will follow in the Albert-Scott Family Cemetery. The family will receive friends from 10-11:00 am prior to the service at the church. Arrangements by McCoy Funeral Home, Blacksburg.