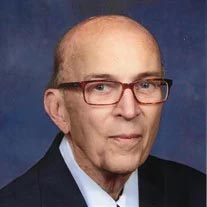 Ted Sadler Lundy, age 87, died January 13, 2021, in Blacksburg, VA with his beloved wife Shirley at his side. Ted lived a long, fulfilling and accomplished life and was a devoted son, brother, husband , father, grandfather and friend to many. He was always proud of serving his native Tennessee.

Ted was born April 24, 1933 outside Nashville to William Elijah and Cordell Sadler Lundy and graduated from Goodlettesville High as a salutatorian at age 17. Ted graduated with a BS in Engineering Physics from UT Knoxville and during his freshman year, received the Allen Prize in mathematics, one of the oldest awards at UT given to the best freshman mathematics student. While an undergraduate, he ran cross country, worked in the athletic department with the legendary General Neyland, and was a member of the Sigma Phi Epsilon fraternity. He also received his MS and PHD in Metallurgical Engineering from UT.

Ted worked at Oak Ridge National Laboratory (X-10) from 1957 to 1988 and was a graduate of the Oak Ridge School of Reactor Technology. He spent one year in the mid-1960’s at Harwell National Laboratory near Oxford, England and also worked at the Department of Energy in Washington DC in the mid-1980’s. During his 31 years at ORNL Ted did research and taught courses in the peaceful industrial use of nuclear energy.

Upon retirement from ORNL, Ted joined the Faculty of Tennessee Tech College of Engineering where he served as a Director of the Center for Manufacturing Research. He served as a member of the DOE Site Specific Advisory Board, a committee addressing issues related to the storage of radioactive materials at X-10, K-25 and Y-12. He also taught mathematics as a part-time faculty member at UT.

Ted was elected to the Knox County Court in 1970 and focused on the need to consolidate city and county governments. His work was instrumental in funding and building the Knoxville/Knox County City-County building. He was a president of the Tennessee Magistrates Association and served on the Tennessee County Service Association Board.

Ted and his first wife Frances were founding members of St. Mark UMC in Knoxville in 1956, and he continued to be an active member of Methodist churches wherever he lived. Ted was also a member of Cherokee Lodge 728, a Master Mason, a Scottish Rite Shriner, and a longtime Toastmaster.

He was an active member of the Lions Club for over 65 years and also a member of numerous other professional and service organizations.

In addition to his wife Shirley Gordon and her family, Ted is survived by his daughter Tina Melo, granddaughters Virginia Ivers (Scott) and Caroline Melo, stepson Eddie Rasnake (Michele) and their children, his stepsisters Carolyn and Sandra, and many Sadler and Lundy relatives. Predeceased by his second wife Janet, his stepson Ronnie Rasnake, his son-in-law Tom Melo, and his older brothers Billie and Lloyd.

A service of Celebration of Ted’s life will be held in the summer in Grayson County, VA. Arrangements by McCoy Funeral Home, Blacksburg, Va.