Jefferson, Adams, and the Fourth of July 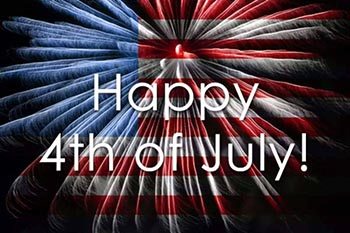 On July 4, 1776, both Thomas Jefferson and John Adams were in Philadelphia as the Second Continental Congress adopted the Declaration of Independence. The Massachusetts lawyer Adams had been an outspoken advocate for independence from Britain, but when an author for the declaration was required, he encouraged Jefferson the Virginian to take the lead.

Jefferson accepted the task and took up his pen. He drafted what he considered “an expression of the American mind.”

Adams and Benjamin Franklin, also on the committee charged with writing the declaration, offered their comments on the draft, and then Congress began debating it on July 1. Jefferson resented that the body continued to change his work, but his ideals and language still shone through in the final draft approved on July 4.

The words of the Declaration became famous, and so did its date of final adoption (although Adams had expected July 2, when Congress actually agreed to declare independence, to become the national holiday).

The paths of Adams and Jefferson later crossed again in Europe. Both represented our young nation in France for a time in the 1780s. Adams, his wife Abigail, and Jefferson enjoyed each other’s company as they dined and talked together in Paris.

When Adams went to Great Britain to serve as the American minister, Jefferson maintained a correspondence with John and Abigail and eventually visited them. After Adams introduced Jefferson to King George III, who treated the Virginian rudely, they toured the gardens of England and stole a sliver of wood from a chair at William Shakespeare’s birthplace.

While Jefferson served two terms as president, Adams brooded on his Massachusetts farm. But passions cooled, and their mutual friend Benjamin Rush encouraged the two to exchange letters. Adams finally wrote his old friend on New Year’s Day 1812, and Jefferson quickly responded. As Adams wrote, “You and I ought not to die before we have explained ourselves to each other.”

Over the ensuing years, the former presidents exchanged 158 letters, ranging from discussions of day-to-day habits to great philosophical questions. Jefferson comforted Adams on the death of Abigail in 1818. Despite their political disagreements, politics remained up for debate in the letters. The disagreements remained, but any acrimony had faded.

Their example still shines for us today. Americans may hold differing opinions, but we can hold them while still respecting each other, carrying on friendships, and exchanging our views without rancor. If Adams and Jefferson could do so after contending with each other for the highest office in the land, so can we in our daily lives.

On Independence Day, when we celebrate the country we share, we ought to remember their example. After all, they were deeply involved in the events of July 4, 1776 when, as Jefferson wrote Adams, “We acted in perfect harmony through a long and perilous contest for our liberty and our independence.”

And they would share one more notable July 4. On the 50th anniversary of the Declaration, July 4, 1826, Thomas Jefferson died at Monticello. His last words were said to be a question: “Is it the Fourth?”

On the same day on his farm in Massachusetts, John Adams died. His last words: “Thomas Jefferson survives.”