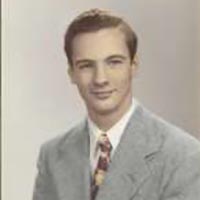 Warren Douglas Hayes Jr., 90, of Englewood, FL and Blacksburg, VA departed this life on February 6, 2020 in the care of family and Hospice. Born September 14, 1929 in Washington D.C. he was the son of the late Warren Doulas Hayes, Sr. and Donna Scott-Smith Hayes.

He was preceded in death by his parents and his wife, Margaret “Bunny” Hayes.

Funeral services will be conducted on Monday, February 10, 2020 at 11:00 AM in the River Church (Blacksburg First Church of God Building, 110 Roanoke St, E Blacksburg, VA) with Father Jonathan Tagg officiating. Burial will follow in the Westview Cemetery, in Blacksburg Virginia.

Kendall Funeral Home in Pembroke, VA is in charge of arrangements. Online condolences may be sent by visiting kendallfuneralhome.com.