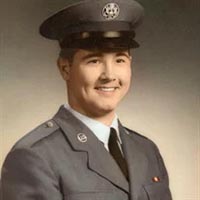 Sam graduated in 1966 from Christiansburg High School, with honors, a member of the Key Club and the Blue Demons football team. He enlisted in the Air Force and trained as an engine technician on F-4 fighters. He served in Vietnam from 1969-1970, and completed his service as a Staff Sergeant in 1972.

After returning from Vietnam, Sam firmly planted his roots in Christiansburg, VA. He simply wanted to be around his family and cherished friends. He later joined the General Electric Company at the Salem, VA plant until his retirement in 2010. Sam loved to go to his cabin at Mt. Rogers and shared many of his happiest times with friends there.

Honesty and integrity best describe Sam. If you wanted a special friend, he was there with his humor and encouragement.

Sam was preceded in death by his parents; and brother, ‘Mr. Peery.’ He is survived by two nieces, Catherine Terry (John), and Julia Rose (Jeff), and their families.

Heaven has received a wonderful man full of laughter and smiles.

Visitation will be held on Friday, July 17, 2020, from 10-11 a.m. at Horne Funeral Home. Funeral Services will begin at 11 a.m. in the Chapel, with interment following in Sunset Cemetery.