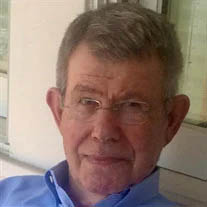 A graduate of Cambridge High & Latin, he then attended the University of Miami and Boston University. He served in the United States Army in Germany. A professional photographer, his career included owning and operating commercial photography studios in Boston and Roanoke, VA. He also worked as a realtor.

Jon was civic minded and enjoyed advocating for the community. His efforts in 1998 kept the downtown Christiansburg post office open, ensuring the historic post office and its 1939 Section of Fine Arts mural remained intact.

He is survived by his wife of 52 years, Stuart Goldsmith Halberstadt; his two daughters, Elizabeth and Katherine. He is also survived by his three brothers, Jerry, Steven, and David; as well as numerous cousins, nieces, and nephews.

Interment is private. In lieu of flowers, memorial contributions may be made to UVA Health’s “Parkinson’s Disease Research Fund – 15789” by visiting www.giving.uvahealth.com and noting the gift is in Jon’s memory.