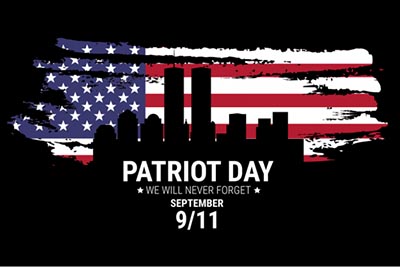 Twenty years ago, our nation was attacked by terrorists. Like many Americans, I remember where I was when I learned of the news on September 11, 2001.

As I worked in my law office that morning, my bookkeeper at the time, Terry Haynie, told me that a plane had struck a Tower of the World Trade Center. We could not understand how a plane could have gotten so off course that it could hit a building. Then we watched live as the second plane crashed into the South Tower, and we knew the United States was under attack.

I immediately went to K-Mart and bought an American flag set to install and to proudly fly that flag at my office. I wanted to display my patriotism and my defiance to whomever our attackers were. We would later learn this despicable attack was the act of “extremist Muslim terrorists.”

9/11 was the worst attack on American soil since Pearl Harbor, made more outrageous by the targeting of civilians. Almost 3,000 innocent men, women, and children died that day at the World Trade Center, the Pentagon, and on United Airlines Flight 93. More than 400 first responders gave their lives at Ground Zero in New York City, including police officers, firefighters, and Port Authority officers. First responders in New York City ran toward danger and they saved hundreds of lives. But in doing so, some made the ultimate sacrifice.

Often, when I walk into the U.S. Capitol, I am particularly reminded of Flight 93, believed to have been headed to destroy the Capitol. Passengers on board Flight 93 were beating on the door to the cockpit to prevent its use as a weapon by actors of terror. Audio from a phone call made on the flight captured one hero exclaiming, “Let’s roll.” During the passengers’ struggle to regain control of the plane, the terrorists chose to crash the plane. 40 men and women died that day when Flight 93 crashed in the Shanksville, Pennsylvania field. I am filled with sorrow for the innocent victims. They were travelers headed to destinations for work, play, or home and because of their bravery they became American heroes.

The evils of 9/11 still horrify, yet the acts of great courage that also occurred that day still inspire. Americans showed that they would not cower in the face of terror. I am filled with immense pride in our nation when I reflect on the spirit shown by so many of my fellow Americans on that terrible day.

As Americans, we continue to honor the extraordinary sacrifice of those who perished on 9/11 and every citizen who protects our nation at home, including our state, local, and federal law enforcement. Throughout the 9th District, brave men and women continue to work every day to keep our communities safe. I am thankful for their service.

I recently witnessed emergency workers and first response teams in Buchanan assisting in the rescue efforts after devastating and deadly flooding. I thank all those working with Buchanan first responders and the Virginia Department of Emergency Management. Their efforts in assisting one of our communities did not go unnoticed in the Ninth District and beyond.

On this day, Americans must also remember our active troops who are fighting to protect our freedom. More people enlisted in the military in the 12 months following the 2001 attacks than they have in any of the 20 years since.

For so long as this nation endures, we as a country should never forget September 11, 2001.

As implied in my recent weekly columns, the “botched” exit has placed us into a position where terrorists may once again target the U.S. The hasty withdrawal from Afghanistan led to a chaotic end to America’s longest war.

It is imperative that we keep actors of terror from breaching our borders again as they did on that chilling Tuesday morning in 2001.