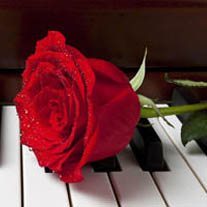 Wayne Alan Gray, 63 years old, of Christiansburg VA, completed his journey here on earth and arrived in Heaven on August 4, 2020.

Wayne was born in Christiansburg, VA on April 8,1957. He graduated from Christiansburg High School and continued to Lee College in Cleveland, TN and his major was music. Wayne was married to Linda Hill for 26 years.

Wayne worked many, many jobs in his life. But the main one that he cherished the most, beside being a dad, he played the piano for “The Singing Nippers for over 20 years. He also was a Bus driver, Tour Bus driver and a Taxi driver. He also worked in several restaurants. He had so many W-2 forms that his dad refused to do his taxes! He was on the High School Tennis team, he was rated #2 in the state of VA. He loves watching the Washington Redskins play football. His favorite holiday was Christmas. He would decorate his house from top to bottom in every room and he collected Santa Clauses. Wayne enjoyed life, he played the piano for Elliston Church of God until last fall. He was truly anointed to play the piano. He was always being silly and funny. He could make you laugh with his funny faces and funny sounds especially sounding like a horse!I

Wayne is survived by His son, Travis Gray and His daughter Meagan Gray. His grandson Jordan Gray. His twin brother Duane Gray and His older brother Norman Gray and His wife, Susan and His “Sis”, Monica Hale. He has 3 nephews and 4 nieces and 5 great-nephews. And a whole lot of extended family and friends. A special family member, Jonathan Thomas.

Wayne is preceded in death by his wife, Linda Gray. His parents, Donald and Ruth Gray and His “other sis” Donette Thomas and his baby brother, Matthew David Gray.

In lieu of flowers memorial donations may be given to Meagan Gray at 108 Lester Street Christiansburg,VA 24073. The family of Wayne Alan Gray sends blessings of thankfulness to our Pastor Ronnie Duncan and Elliston Church of God. Also to Intriped Home Health nurses and Intriped Hospice nurses.