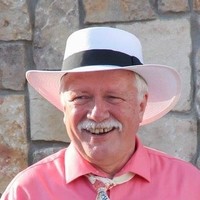 Juergen Gerlach, Mathematics Professor Emeritus from Radford University, passed away Monday night in his home in Radford. Born July 22, 1950 in Oranienburg, Germany, Juergen came to the U.S. in 1980 to get his Ph.D. at Oregon State University. In 1986, he married Karen Anderson Gerlach in Columbia, Missouri and then took a teaching position at Radford University where he taught until his retirement in June of this year. In April of 2013, Juergen became a U.S. Citizen.

Music was always his passion; he enjoyed many genres, but in the last few years became a fan of country and blue grass. He loved playing his 12-string guitar at the Brick House Pizza Jam for several years and helped write and record a couple of songs before he was no longer able to play. Growing up in Germany, he had a love of soccer. He was a referee for over 30 years, and coached youth soccer in Radford for over 10 years. As an advocate for youth sports, he served two terms on the Radford Recreation Commission. Juergen also became an avid hiker later in life. His wife (Karen), daughter (Lori) and son-in-law (Doug Kretschmaier) all enjoyed many hikes together across the Virginia and North Carolina mountains.

In lieu of flowers or food, Juergen would like everyone to take a hike and/or donate to the Appalachian Trail Conservancy. He also asks that folks consider donating blood, platelets, or money to the American Red Cross.

A memorial service is planned for Saturday, November 23rd, at 3:30 p.m. in the auditorium of the Bonnie on Radford University Campus (225 Jefferson Street), to be followed by a celebration of life at Sharkey’s Up Top (1202 East Main Street, Second Floor).

The Gerlach family is in the care of Mullins Funeral Home & Crematory in Radford. www.mullinsfuneralhome.com