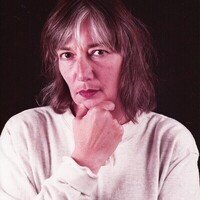 Suzi Gablik, an influential artist, art critic, teacher and writer, passed away in her home at Warm Hearth Village in Blacksburg, Virginia on May 7, 2022. Suzi, born in New York City in 1934, was a critical figure during the burgeoning contemporary art world in New York and London. During the 1950s she studied painting with Robert Motherwell and attended Hunter College and Black Mountain College.

At the age of 25 Suzi spent nearly a year researching the work of the Belgian surrealist artist Rene Magritte while living in his attic. She later published the first monograph on his work.

In 1966 Suzi moved to London where she collaborated with John Russell on their book Pop Art Redefined, 1969. She then spent fifteen years traveling the globe and writing as the London correspondent for Art in America. Through this work she became well-known for her passionate and often controversial writing on modern art, poignantly expressed in her seminal trilogy of books Has Modernism Failed?, 1984, The Re-enchantment of Art, 1991, and Conversations Before the End of Time, 1995.

Suzi lectured and wrote extensively in the areas of philosophy of art, cultural criticism, and cultural politics throughout her career. In 1989 Suzi was invited to Virginia Tech where she was appointed the C.C. Garvin Endowed Professor of the College of Arts and Sciences. Suzi fell in love with the region, later moving to Blacksburg in 1991. She is survived by countless inspired students, loving friends and chosen family.

Suzi Gablik was awarded a National Lifetime Achievement Award for outstanding achievement in the visual arts by the Women’s Caucus for Art in 2003. Her papers are held at the Smithsonian’s Archives of American Art.

In remembrance of the vibrant life lived and impactful legacy left by Suzi Gablik, scholarship gifts may be made in her memory to the School of Visual Arts Annual Scholarship Fund within the College of Architecture and Urban Studies at Virginia Tech. These gifts will be used to support students pursuing endeavors aligned with Suzi’s interest in the formation and impact of socially-engaged art. Gifts may be mailed to: Virginia Tech Office of Gift Accounting, University Gateway Center (0336), 902 Prices Fork Road, Blacksburg, VA 24061; or made online at give.vt.edu.

A guestbook is available to send online condolences by visiting www.kendallfuneralhome.com. The staff of Kendall Funeral Home are honored to serve the friends and family of Suzi Gablik and a life well lived.