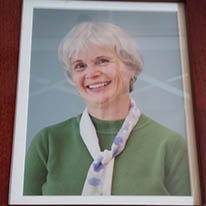 This was an ethnically diverse neighborhood. Religion and church were important in that community. “We children talked about religion and the seriousness of religion.” The questioning that went on among Jewish, Protestant, and Catholic, faiths left a lasting impression on her. Christine recognized early on what she wanted to do with her life, “Ministry was my call. There was never any question that anything else would be satisfying.”

In the 1960s there were few women in the ministry. She found that Unitarian Universalists had ordained women for many years. At that time, she began learning about the liberal religion that suited her inquiring mind. “What I like about it is the sense of inclusiveness and diversity of ways that faith and meaning could be approached.”

After graduating from The New School for Social Research she worked as a medical social worker in NYC and then in health-jobs in South Bend, Indiana. From 1984-1987 she was Director of Religious Education for Children and Youth at UU First Jefferson Church, in Ft. Worth, TX. She then attended Brite Divinity School of Texas Christian University where she received her Master of Divinity in 1997. Her first full-time ministry began at the UU Fellowship of the New River Valley in 1999. She retired from that position in 2010 and was granted Minister Emerita status in 2011.

Following her retirement, she taught in the Department of Philosophy and Religion at Radford University. In the later part of her ministry, she met Russell Flack who became her husband and the love of her life.

“The first time I saw Christine, the first glimpse, I thought she was an angel. At the time I said to her ‘All those books make me think you’re an interesting person and I would like to talk to you about them.'” And they did-for the next fifteen years. They enjoyed the outdoors, bought a home together in Radford, and enjoyed just being together. “Sitting together out back on the swing was our best pastime.”

Chris was an extraordinary and humble person. She liked people and being with them, but she loved quiet time alone sewing, knitting, gardening and reading. Together they visited historical sites. Russell was Christine’s dedicated and loving caregiver. Intrepid Hospice assisted him.

There will be a memorial service and celebration of Christine’s life which will be held Oct. 8, at 11 am at the UUC New River Valley, 1301 Gladewood Dr., Blacksburg, Va. Contact administrator@uucnrv.org to obtain Zoom information for remote attendance.

Donations may be made to a charity or cause of your choice. Condolences may be expressed on-line @ Givens Funeral Home Funeral Home in Pearisburg, VA. Information in the first paragraphs from article by Mary Lou Bruton, The Roanoke Times, Current Section, Sept. 18, 1999.