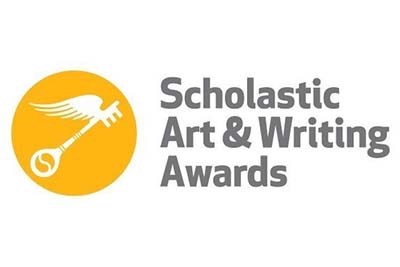 The Fine Arts Center for the New River Valley received the Gold Key for Excellence in the Field Award from Scholastic sponsored by the Alliance for Young Artists & Writers.

Pulaski, VA, June 10, 2021. On Thursday during its National Leadership Conference, the Alliance for Young Artists & Writers awarded the Fine Arts Center for the New River Valley it’s Gold Key Award for Excellence in the Field. Christopher Wisniewski, Executive Director of the Alliance for Young Artists & Writers, presented the award to the Center in acknowledgment for their work over the past year as an affiliate in the Scholastic Art & Writing Awards. The awards are the nation’s longest-running and most prestigious scholarship and recognition program for creative students in grades 7–12. The Fine Arts Center coordinates the Scholastic Art Awards for students in Southwest Virginia that encompasses a region comprising schools and arts education programs in 23 counties in the Commonwealth.

During the awards ceremony, held online via Zoom, Wisniewski noted that the board of the Fine Arts Center demonstrated, “resilience in the face of adversity; stepping up when they could have stepped back.” The Center was acknowledged for increased efforts to communicate with art educators and their students despite a time of adversity and for their use of online technologies to celebrate and promote student artists and their teachers. As part of this, Wisniewski commended Rhonda Whitehurst, Vice-President of the Board of Directors, for serving as a member of the Scholastic Advisory Council and increasing the Center’s connections throughout the organization. In celebration of this year’s regional and national finalists, the Fine Arts Center has prepared an online gallery on it’s website at facnrv.org/scholastic-2021.

John Ross, President of the Board of Directors for the Center, acknowledged how the all-volunteer board of the organization pulled together and rallied to the challenge of ensuring student artists in Southwest Virginia and their teachers continued to have this opportunity this year, a period when almost all students were participating in some form of remote learning. Echoing popular actor, director, and producer Reese Witherspoon, a guest presenter from the previous night, Ross noted “being connected is everything.” He acknowledged that being connected has become the motto of the Center and thanked Wisniewski and the staff at the Alliance for noticing it through this national recognition.

Also joining was board member Terrie Sternberg, who shared the sentiment that the board was humbled by the recognition but acknowledged that providing this opportunity for young artists was paramount and worth the effort.

Scholastic reported that this year nearly 230,000 works of art and writing were submitted to more than 100 Affiliate Partners across the country. This year, students in Southwest Virginia submitted approximately 300 works, and of those, 82 received awards that qualified them for national competition. Six students from Southwest Virginia received recognition at the national level for their art.

The Fine Arts Center of the New River Valley has been the official affiliate of the Scholastic Art Awards for Southwest Virginia for nearly twenty years. They are supported, in part, by funding from the Town of Pulaski, Pulaski County, the C. E. Richardson Benevolent Foundation, the Randolph Foundation, and the Virginia Commission for the Arts as well as through membership and donations. For more information about the Fine Arts Center, please visit their website at FACNRV.org.

More information about the Alliance for Young Artists & Writers and the Scholastic Art & Writing Awards can be found by visiting the Scholastic News Room at www.artandwriting.org.