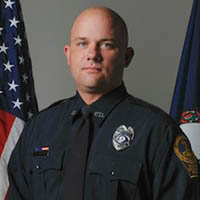 He is preceded in death by his father James Edward Dunford, Jr. He is survived by his wife Susan Sutherland Dunford, his mother Cecilia Lawrence Dunford of Rich Creek, Virginia. His sister Michelle Dunford Leveredge and spouse Jerry Wayne Leveredge of Maryland. His uncle Garry Wayne Dunford and Aunt Katie of Maryland. His loving companion, Mittens. A nephew and several nieces, loving cousins and special friends, too many to list.

James liked to hunt and fish and was an avid Alabama football fan. On the weekends you could always find him on the couch watching football and Nascar. James was employed at Radford University as lieutenant in the police department since 2007. He graduated with an Associate’s degree at Bluefield College. He was only two classes away from getting his master’s in Criminal Justice at Radford University.

Family will receive friends at on Saturday 22, 2020 at the Blue Ridge Church 1655 Roanoke Street Christiansburg, VA 24068 visitation at 1pm with funeral service to follow at 2 pm.

In lieu of flowers memorial donations may be made to the family to help start a James E. Dunford, III scholarship.