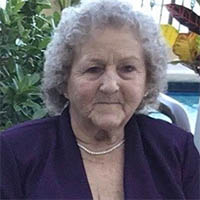 Margaret Vaught Davis, age 86, of Blacksburg, died, Sunday, April 5, 2020, in her home. She was born in Giles County on December 23, 1933 to the late Roy King and Virginia Meredith Vaught. She was also preceded in death by her husband Thomas Eldridge Davis, six brothers and three sisters.

A celebration of life will be held at a later date. Services by McCoy Funeral Home, Blacksburg.